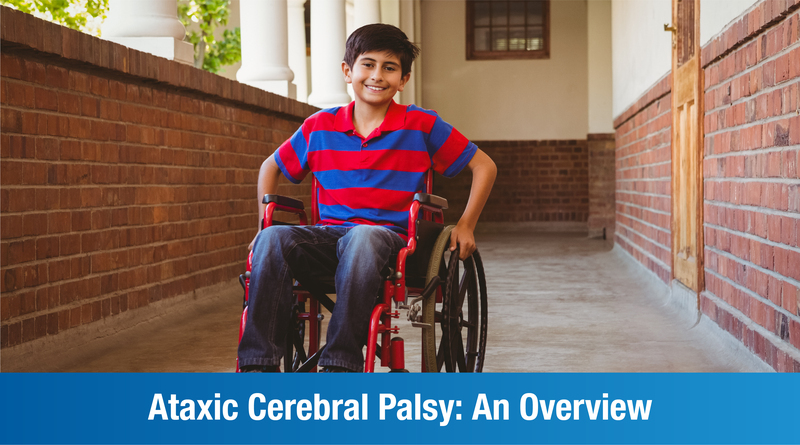 Ataxic Cerebral Palsy tends to manifest first as hypotonia (lack of muscle tone) in the first six months to one year after birth. Children of this age may have unusually floppy limbs, which may improve as the child grows older but never reach fully normal levels. As they grow older, symptoms may manifest as delays in hitting developmental milestones such as rolling over, sitting up, standing, and walking. Common Ataxic Cerebral Palsy symptoms to watch out for include:

Ataxic Cerebral Palsy occurs due to damage to the cerebellum at, before, or shortly after birth. The cerebellum is responsible for balance and coordination as well as posture and communication, and fine-tunes movement commands for the rest of the body. When the cerebellum is damaged, motor signals cannot be relayed properly to the central nervous system and movement disorders ensue. Damage can occur due to:

If the parent can prove that the Ataxic Cerebral Palsy is due to negligence or malpractice on the part of the healthcare provider, they can potentially seek compensation in court.

There is no specific diagnostic test for Ataxic Cerebral Palsy. In the case of premature birth or other prenatal / postnatal conditions that are known risks for Cerebral Palsy, doctors may monitor them from an early age for signs.

If a child has been exhibiting symptoms, it is important to get a checkup immediately. The doctor will assess their abilities in the clinic setting, including muscle tone, reflexes, movements, and overall growth, and may run some general tests before recommending the patient to a specialist. The specialist will conduct a more detailed neurological test along with an MRI scan, a CT scan, electromyography (EMG), or electroencephalography (EEG). This not only checks for signs of brain and/or muscle damage but also eliminates other conditions that could be causing the symptoms. Some specialists will also recommend speech, hearing, and vision tests, as well as a visit to an orthopedic doctor for a more detailed examination of the child’s movements and reflexes.

Overall, most cases of Ataxic Cerebral Palsy can be diagnosed within the first two years of life. It may sometimes take a while to confirm the diagnosis, though, so parents should be patient and not panic.

There are several treatment options the doctor can recommend based on the child’s symptoms. Treatment focuses on improving bodily coordination and improving the child’s proficiency at daily tasks. Typically, an Ataxic Cerebral Palsy treatment plan will include:

Parents and caregivers will need to help their child perform the exercises at home and ensure that the living space is adjusted as needed for the child’s safety. For instance, as children navigate poor coordination and unsteady gait, it might be a good idea to pad the floors with carpeting and cushion any hard edges on furniture so that the child doesn’t hurt themselves even if they fall.

The word ataxia means a lack of order or coordination. Patients with Ataxic Cerebral Palsy, therefore, display movements that are clumsy, uncoordinated, and jerky.

While Ataxic Cerebral Palsy primarily affects motor functions on coordination and gait, it can also affect cognitive function depending on the extent of the brain damage.

Tremors occur due to damage to the part of the brain known as the cerebellum. In Ataxic Cerebral Palsy, children frequently experience intention tremors, in which the tremor kicks in when they are trying to perform a deliberate movement like picking up an object.

Three early signs that could indicate Cerebral Palsy include developmental delays in actions like crawling or sitting, abnormal posture, and abnormal muscle tone.

Ataxic Cerebral Palsy is the subtype of Cerebral Palsy with the largest genetic component. Up to 50% of cases are inherited in an autosomal recessive fashion.

Ataxic Cerebral Palsy occurs because of damage to the cerebellum, the part of the brain that controls coordination and balance.

The four key types of Cerebral Palsy include Spastic, Dystonic, Ataxic and Mixed.

Among the most prominent Ataxic Cerebral Palsy symptoms is unsteady gait. Young children will typically walk with their legs much further apart than normal and may frequently fall over when trying to stand or walk.

Ataxia refers to abnormal uncoordinated movements that occur due to a lack of muscle control over voluntary movements. Ataxia can affect gross and fine motor skills, speech, and eye movement.

Certain types of infections such as German measles, toxoplasmosis, herpes, and cytomegalovirus can damage the brain of the developing fetus or newborn infant, which could lead to Cerebral Palsy later in life.

Cerebral Palsy is a non-progressive disorder, which means that it will not worsen as the child grows older.

Certain viral and bacterial infections, when contracted by either the pregnant mother or the infant, could cause brain damage that later leads to Cerebral Palsy.

In conclusion, life with Ataxic Cerebral Palsy can be difficult, but early intervention goes a long way in correcting the child’s movement disorders and helping them function better. Parents should regularly take their young children for check-ups so that any symptoms can be spotted and evaluated right away. With the right care and enough love and support from you, your child can take their Ataxic Cerebral Palsy diagnosis in their stride and lead a happy life.