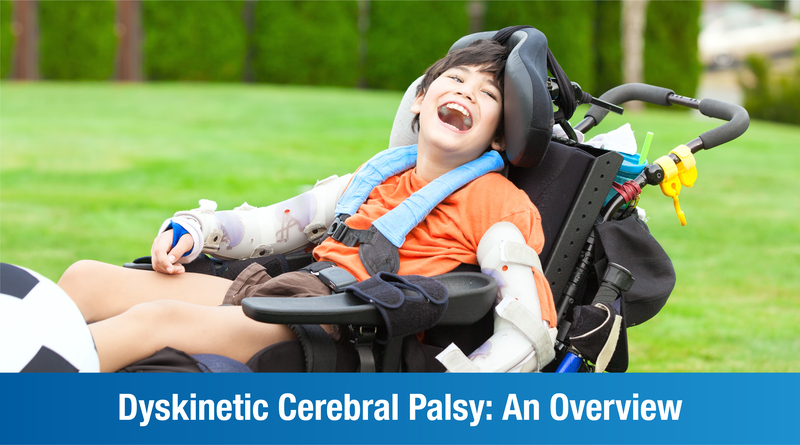 Dyskinetic Cerebral Palsy is one of the four subtypes of Cerebral Palsy and occurs due to damage sustained by the cerebellum or basal ganglia. It causes involuntary contractures and gait abnormalities that can be highly painful to navigate, which is why it is vital for children to start receiving treatment as early as possible. It is natural to feel overwhelmed if you hear that your child has Dyskinetic Cerebral Palsy, which is why having a thorough understanding of what to expect is critical. Here, we provide a brief guide to the same.

However, these terms are often used interchangeably, and the causes and treatments are the same for both. As a non-progressive disease, Dyskinetic Cerebral Palsy will not worsen with time, although the patient’s needs may evolve as they grow older. Treatment helps to manage the symptoms and improve the patient’s overall functionality.

The initial symptoms of Dyskinetic Cerebral Palsy, including jerky movements and poor balance, may be noticeable as early as nine months of age. However, some children may have irregular movement patterns simply because of a developmental delay and not Cerebral Palsy. Parents should thus avoid panicking and rely on the child’s doctor to provide a diagnosis.

The risk factors for Dyskinetic Cerebral Palsy include:

There is no specific diagnostic test for Dyskinetic Cerebral Palsy. If you observe symptoms in your child, it is important to get an appointment with a doctor who will observe your child’s movements and reflexes in a clinic setting. As a parent, you will need to provide a full medical history for the child, including any conditions that run in the family, along with detailed information on your child’s symptoms.

If the doctor suspects Dyskinetic Cerebral Palsy, they may then recommend you to a specialist who will closely examine your child’s movement, speech, hearing, reflexes, posture, and coordination. Some of the tests they might order include an MRI, a CT scan, an electroencephalography (EEG), and an electromyography (EMG). These serve to identify brain damage and also rule out any other conditions that may be causing the symptoms. In addition, they may recommend specialists who will assess the child’s speech, hearing, vision, and intellectual capabilities. Getting a final diagnosis might take thus some time, up to several months in some cases. It is important to be patient and not panic unduly.

A treatment plan tailored to your child’s symptoms and abilities will help to expand their range of functional movement. The earlier the intervention, the better your child’s chances at gaining motor control and functionality. Typically, Dyskinetic Cerebral Palsy treatment will feature the following:

Some parents may wish to sign their child up for alternative treatments like herbal medicine or acupuncture. However, always consult your doctor before doing so, as some of these treatments may interfere with the doctor-prescribed therapies.

The four main types of Cerebral Palsy are Spastic, Dyskinetic, Ataxic, and Mixed.

Athetoid Cerebral Palsy can be treated through a multi-pronged approach that includes Physical Therapy, Occupational Therapy, Speech Therapy, and medication.

Athetoid Cerebral Palsy is caused due to a brain injury sustained before, during, or shortly after birth.

While chorea refers to a continuous, randomly appearing sequence of one or more involuntary movements, athetosis is a slow, continuous writhing movement.

Athetoid is a word used to describe slow, writhing involuntary movements of the limbs, feet, and hands.

Choreoathetosis is a movement disorder that causes involuntary movements of both the chorea and the athetosis type. It is usually indicative of an underlying cause.

Athetosis is a condition in which involuntary writhing movements occur due to abnormal muscle contractions. It impairs gross and fine motor skills as well as speech.

Athetosis can be treated by regular physical therapy to regain strength in and control over muscles. There are also certain medications that can suppress involuntary movements.

Both chorea and tremor are types of involuntary movement. However, chorea does not have predictability and rhythmicity, which tremors do.

Cerebral Palsy is a non-progressive disease, which means that athetosis will not get worse as the child grows older.

Signs of athetosis to watch out for include slow, writhing involuntary movements that get worse when the patient attempts to correct their posture or move of their own volition.

Living with Dyskinetic Cerebral Palsy can be overwhelming, but treatment and support can go a long way to manage it. As the parent, be sure to constantly monitor your child’s progress and keep your doctor informed of any changes. With early intervention and regular treatment and check-ups, your child can enjoy a functional and pain-free life.