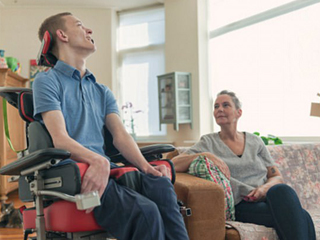 Amyotrophic lateral sclerosis is a type of motor neuron disease. It belongs to a group of progressive, neurological disease that leads to dysfunction in the nerves that control muscle movements. This causes muscle weakness and changes in how the body functions. In the advanced stages, amyotrophic lateral sclerosis affects the nerves that control breathing and it could be fatal.

Amyotrophic lateral sclerosis is the most commonly found motor neuron disease. It is sometimes called Lou Gehrig\’s disease, after the famous baseball player who was affected with this condition.

After the onset of symptoms most people with ALS will live for three to five years. About 10% of the people may live for another ten years or longer. For example Stephen Hawking, the renowned physicist was diagnosed with ALS when he was 21 years old. He lived till 76 and remained a leader in the field of science.

There is no cure as such, but symptoms can be relieved with treatment and quality of life can be improved.

Some key points of amyotrophic lateral sclerosis
• ALS affects nerve cells in the brain and spinal cord, leading to muscle weakness, loss of motor function, paralysis, breathing problems and eventually death.
• Most people with ALS will live between 3 and 5 years after symptoms appear.
• The exact cause is unknown, but environmental and genetic factors may be involved.
• There is currently no cure and treatment aims to relieve symptoms, provide social and emotional support, and possibly slow disease progression.

What is amyotrophic lateral sclerosis?

ALS degenerates nerve cells that are involved in voluntary muscle actions known as motor neurons. These are actions that we can control such as those in the arms, legs and face. Motor neurons are located in the brain and spinal cord. As the ALS becomes severe, these cells degenerate and die. They cease sending messages to muscles. Brain can no longer control voluntary movements and as a result muscles weaken and waste away.

As the disease intensifies, it affects more and more voluntary muscles. The person loses their control over arms, face and legs. With time, the inability to breathe without external support can lead to respiratory complications.

There are different types, according to their signs and symptoms and whether or not there is a clear genetic association.

Sporadic ALS: This type occurs randomly and it accounts for 90 to 95 percent of cases. There is no clear risk factor or cause.

Familial ALS: As the name indicates, familial ALS is inherited. Around 5 to 10% of the ALS is familial. The child of a person with ALS is carrying a risk of about 50% of being affected with the condition. Rarely, it can affect a person in their teens. Research is still ongoing as to which genes are affected.

As for the exact cause of ALS, it is still unclear to the medical world. But the following possible causes are suspected.

• Disorganized immune response: The immune system may attack some of the body\’s cells, possibly killing nerve cells.
• Chemical imbalance: People with ALS often have higher levels of glutamate, a chemical messenger in the brain, near the motor neurons. Glutamate in high quantities is known to be toxic to nerve cells.
• Mishandling of proteins: If proteins are not processed correctly by nerve cells, abnormal proteins could potentially accumulate and cause the nerve cells to die.

However, there is no concrete evidence to prove that certain lifestyle changes can reduce the risk of the disease.

Generally symptoms usually appear in a person in their late 50s or early 60s, but it can show up much younger or older. Severity of the disease changes from person to person. In the early stages signs and symptoms are hardly noticeable, but become evident over time.

Common symptoms include:
• difficulty carrying out daily activities, including walking
• increased clumsiness
• weakness in the feet, hands, legs, and ankles
• cramping and twitching in the arms, shoulders, or tongue
• difficulty maintaining good posture and holding the head up
• uncontrolled outbursts of laughing or crying, known as emotional lability
• cognitive changes
• slurring of speech and difficulty with voice projection
• pain
• fatigue
• problems with saliva, and mucus
• difficulty breathing and swallowing in the later stages

Stem cell therapy has been coming up with break-throughs in the treatment of diseases that were hitherto thought irrevocable and ALS is no different.

Studies have shown that stem cell transplantation shows great potential as a treatment of ALS. It has the potential to be “an important alternative strategy” in treating the disease. Through stem cell transplantation it is possible to replace degenerating or dysfunctional neurons. This approach could pave the way to circumvent the main impediments of the disease, potentially improving the symptoms and arresting the disease progression.

Stem cells have the capacity to create several signaling molecules that can modulate their surrounding environment. If stem cells could be manipulated to send anti-inflammatory and pro-survival signals, they could potentially prevent neuron degeneration and death seen in amyotrophic lateral sclerosis.

Plexus offers both intensive and comprehensive treatment programs comprising of stem cell therapy and rehabilitative interventions to deal with the deficits caused by ALS. Our team of professionals comprise of neurologist, stem cell therapist, physiotherapist, occupational therapist, speech and language therapist that provide holistic care to the patient maximizing recovery in the shortest possible span of time.

For enquiries related to treatment of ALS, drop a message to plexusnc.com