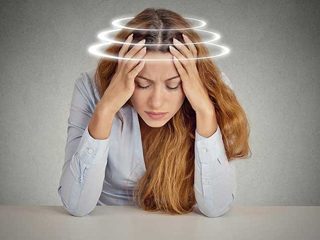 Migraines are bouts of intense recurring and painful headaches. Before the actual attack of migraine the person can feel warning signs and other symptoms. Unfortunately, the patient has to suffer from the extreme pain of migraine for hours or even days if timely medical treatment is not sought. People affected with migraine are likely to have an aura of sensory disturbances followed by severe headache that commonly appears on one side of the head.

• moderate to severe pain, usually confined to one side of the head but capable of occurring on either side of the head
• severe throbbing or pulsing pain
• increasing pain during physical activity or when straining
• inability to perform day-to-day activities due to pain
• feeling sick and vomiting
• increased sensitivity to light and sound, relieved by lying quietly in a darkened room

Causes of migraine:
The exact cause of migraine is not known to the medical world till now. It is believed that it stems from the abnormal activity of the brain. If someone in your family is suffering from this condition, it increases your chances of getting affected; genetics certainly has an influence on this disease. However, the following factors are likely to trigger migraines.

Hormonal changes: Women during menstruation can have migraine due to the hormonal imbalance

Physical causes: Fatigue and not having enough sleep, shoulder or neck stiffness, poor posture and overexertion have all been related to migraine. Hypoglycemia (low blood sugar) and weariness can also act as triggers.

Dietary triggers: Alcohol and caffeine can set off migraine attacks. Some specific foods are also attributed to cause migraine. For e.g. chocolate, cheese, citrus fruits etc. Irrational eating habits and dehydration have also been labelled as potential triggers.

Some interesting facts on migraine:
• Though symptoms of migraine differ from person to person some people can pinpoint the triggers or factors that lead to migraine headaches, such as tension, stress, allergic reaction etc.

• Some people get these warning signs and symptoms in advance

Migraine aura:
Migraine aura is something that is as important as migraine for people suffering from this condition. Auras act as a warning, alerting people that a migraine attack is about to set in. Auras include:
• confusing thoughts or experiences
• the perception of strange, sparkling or flashing lights
• zig-zagging lines in the visual field
• blind spots or blank patches in the vision
• pins and needles in an arm or leg
• difficulty speaking
• stiffness in the shoulders, neck, or limbs
• unpleasant smells

Migraine attacks present as moderate to severe headache and generally appear on one side of the head, usually accompanied by vomiting and nausea.

Treatment for migraine:
There is no single cure for migraines. Treatment mainly focuses on preventing a full-blown attack and abating the symptoms that lead to the attack. The following lifestyle changes can be introduced to reduce the frequency of migraine attacks:
• getting enough sleep
• reducing stress
• drinking plenty of water
• avoiding certain foods
• regular physical exercise

In some people special diets such as gluten-free is also found beneficial. One should seek a medical opinion if the above-mentioned lifestyle changes do not bring a visible difference in the frequency of migraine.

Have questions on migraine? Drop a message at plexusnc.com and we will get back to you as soon as possible.

One thought on “Migraine”