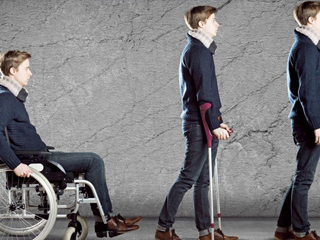 We have learned in school that paralysis means the complete inability to move, to sense touch, or to control bodily sensations.  When we apply the term paralysis in medical parlance, the real meaning is actually significantly more nuanced because the extent to which a person is not able to move his/her body (as a whole or part) may undergo changes over a period of time.  Here physical therapy and changes in overall health play a significant role.

Simply put, paralysis means inability to move the body.  It could be either temporary or permanent.  Paralysis happens as a result of nerve damage, not because of injury to the affected part.

In reality there are various types of paralysis because there are number of ways that the body can be injured, though paralysis is generally classified into four categories which have to do with the part of the body that is affected.

As the name suggests, monoplegia is paralysis of a single area of the body, usually one limb. People with monoplegia are generally able to retain control over the rest of their body, but cannot move or feel sensations in the affected limb.  Cerebral palsy is attributed as cause of this condition, though number of other injuries and diseases can trigger this form of partial paralysis, including:

Hemiplegia impairs the arm and leg on the same side of the body, like monoplegia the most common cause is cerebral palsy.  The intensity of this condition varies from person to person and may change as the time passes.  Usually hemiplegia starts with a sensation of pins and needles and progresses to weakening the muscles and eventually intensifies to complete paralysis.  Level of functioning of people affected with this condition varies day to day depending on the overall health, age, activity level and other factors.

Point to be noted is hemiplegia should not be confused with hemiparesis which means weakness affecting the one side of the body.  However, hemiparesis can be the warning symptom of hemiplegia, especially for people with neurological disorders.

Hemiplegia sometimes is temporary and getting the patient cured out of this condition depends on treatment, particularly early interventions such as physical therapy and occupational therapy.

Paralysis below the waist is called paraplegia and it usually affects both legs, hips and other functions such as having sex and elimination of waste from the body.  There is a general misconception that people with paraplegia cannot walk, move their legs, or feel anything below the waist, in reality it is very subjective and varies from person to person.  Thus paraplegia refers to significant impairment in mobility, not necessarily a permanent and complete paralysis.  In rare cases people with paraplegia recover spontaneously.

Spinal cord injuries are attributed to the most common cause of paraplegia.  These injuries hamper the brain’s ability to send and receive signals below the area of the injury.  Some other causes include:

Quadriplegia means paralysis below the neck.  It is also called tetraplegia.  All four limbs as well as the torso are generally affected.  As with paraplegia, the level of disability and the loss of function differ from person to person.  Some quadriplegic patients regain full or partial function spontaneously, while the rest gradually retrain their brains and bodies through specialised physical therapies and exercises.  At times, quadriplegia can be a temporary condition due to brain injuries, stroke, or temporary compression of spinal cord nerves.  As with paraplegia, spinal cord injuries are the major cause of quadriplegia, that include automobile accidents, acts of violence, falls, and sporting injuries, especially injuries due to contact sports such as football.

Other causes of quadriplegia include:

Stem cell therapy has opened a new facet of medical treatment where it provides treatment for paralysis that otherwise was considered impossible to be treated.

Stem cells treatment involves administration of concentrated cells in the targeted area to form colonies; a peculiar characteristic of stem cells, adapt the properties of resident stem cells and initiate some of the lost functions that have been compromised by the disease or injury.

To conclude, it would not be an exaggeration to say that stem cell therapy has given a ray of hope to thousands of patients suffering from paralysis.