Multiple Sclerosis Vs ALS: A Comparison 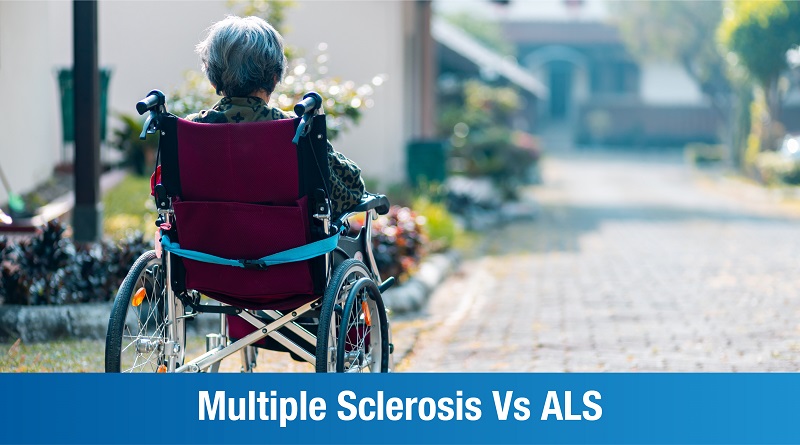 If you’re experiencing symptoms like muscle spasms, fatigue, and trouble walking, it’s important to get a check-up as soon as possible. You might read online that your symptoms could fit either of two diagnoses – Multiple Sclerosis or Amyotrophic Lateral Sclerosis. And while on the surface they do have some features in common, ALS and MS actually are very different. Here, we offer a brief guide on the difference between ALS and MS so that you are well prepared for what to expect.

Amyotrophic Lateral Sclerosis is part of a category of conditions known as Motor Neuron Disease (MND). Motor Neuron Diseases are a group of neurodegenerative disorders that selectively affect motor neurons – cells that control all the voluntary muscles of the body. Amyotrophic Lateral Sclerosis is also known as Lou Gehrig’s Disease. The brain of the patient can no longer send messages to the muscles, causing them to weaken and eventually die. ALS is an inherited disease in about 5-10% of patients, and with unknown causes in the remaining cases. There is no cure, although treatment can slow its progression and improve overall functionality.

Multiple Sclerosis (MS) is a chronic inflammatory condition of the central nervous system. It is an autoimmune demyelinating disease, which means the immune system mistakenly attacks normal tissues — in this case, the myelin or protective covering around nerve fibers. This leaves scarred tissues or lesions in multiple areas, disrupting electrical impulses throughout the body. When the myelin sheath is damaged, nerve impulses slow down or even stop, causing neurological problems. The cause of Multiple Sclerosis is unknown in most cases, although genetic and environmental factors could play a role. Treatment can slow disease progression and manage symptoms so that patients live an almost normal lifespan.

When it comes to ALS vs MS, both diseases manifest in a somewhat similar fashion, which is why several people confuse them. Here’s what they have in common:

Difference between ALS and MS

ALS and MS differences far outnumber the similarities. This is because they are completely different conditions, with different origins and different rates of progression. We can discuss the differences as follows.

What are usually the first signs of ALS?

People with ALS may initially notice symptoms like muscle twitches or cramps, weakness in one arm or leg, or slurred speech.

Is MS more common than ALS?

ALS is regarded as a rare disease, with fewer than 20000 cases currently known. By contrast, about 2.5 million people worldwide are currently known to be living with Multiple Sclerosis.

Is MS linked to ALS?

Some research indicates that relatives of people with Multiple Sclerosis were significantly more likely to be diagnosed with ALS. This could indicate commonalities between the diseases, particularly given that both have an environmental and genetic component to them.

Characteristic symptoms of ALS include weakness, muscle cramps, or spasticity in the legs.

Can ALS be mistaken for MS?

It often happens that ALS is mistaken for Multiple Sclerosis, owing to the similarity in symptoms such as scarring around the nerve fibers, fatigue, muscle spasms, and trouble walking.

Can you have ALS and MS at the same time?

It is possible for a patient to have both ALS and MS, but it is extremely rare.

Is tingling a symptom of ALS?

ALS does not cause symptoms like numbness, tingling, or loss of sensation.

How do I know I have ALS?

If you observe symptoms in yourself such as muscle weakness, slow or slurred speech, muscle twitches or muscle tightness, it may be a good idea to get a check up for ALS.

What part of the body does ALS affect first?

ALS tends to start in the limbs, feet, or hands before spreading to the rest of the body.

How fast is ALS progression?

While the individual rate of progression may differ, the median survival after diagnosis of ALS is about 5 years.

How fast do you lose weight with ALS?

ALS patients may lose up to 10% of their body weight in the first year after diagnosis. This is mainly on account of muscle wastage, as well as dysphagia (trouble swallowing).

What is the most aggressive form of ALS?

The most aggressive type of ALS is bulbar ALS, which attacks the muscles used in swallowing, speaking, and breathing and is typically fatal within months.

What is the average lifespan of a person with ALS?

On average, a person can survive about two to five years after the ALS diagnosis, although many may go on to live for decades.

In short, if you find yourself asking ‘what is the difference between ALS and MS’, know that they are completely different conditions that require their own treatment approach. Living with either can be tough, but early diagnosis, a tailored treatment program, and the support of your loved ones will go a long way in helping you navigate the condition.