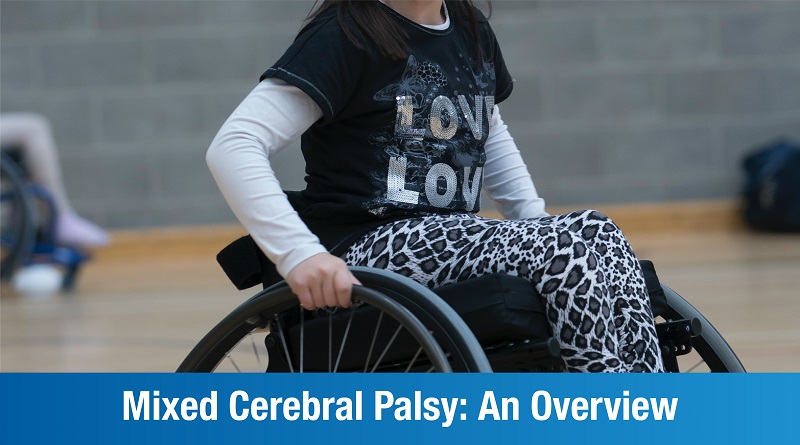 Every parent’s greatest wish is to have a happy and healthy child, free from disease or pain. Watching their children struggle with painful joint contractures or impaired swallowing is a tough ordeal. Mixed Cerebral Palsy is a lifelong diagnosis, but treatment options are improving every day and your child can enjoy a high degree of functionality and independence with early intervention. Here, we delve deeper into what mixed type Cerebral Palsy looks like and the treatments available for it.

Cerebral Palsy refers to a group of neurological disorders that affect movement, muscle tone, coordination, and motor skills caused by damage or abnormalities in the developing brain. It is a non-progressive condition that occurs due to brain damage sustained before, during, or shortly after childbirth. The four unique types of Cerebral Palsy (apart from mixed CP) are Spastic CP, Ataxic CP, Hypotonic CP, and Athetoid CP. Cerebral Palsy has no ultimate cure, but tailored treatment programs can manage the symptoms to a considerable extent.

In Mixed Cerebral Palsy, the patient exhibits symptoms of more than one of the above four types. It accounts for around 15.4% of all Cerebral Palsy cases, making it the second most common type of Cerebral Palsy. In patients with mixed type Cerebral Palsy, there is damage to multiple motor control centers in the brain. The symptoms will depend on where exactly the damage has been sustained.

In children with Mixed Cerebral Palsy, there occurs brain damage that affects multiple control centers of the brain. Depending on where the damage occurred and to what degree, there will be abnormalities in the way the child develops. In general, the types of brain damage that someone with mixed CP may have include:

The symptoms of mixed type Cerebral Palsy depend on which areas of the brain have sustained damage, and as such, each child will have a unique form of the condition. Children will typically exhibit a mix of the symptoms of two or more types of CP. General symptoms include:

Depending on the extent of the brain damage, mixed Cerebral Palsy may exhibit in either the upper or lower limbs, along one side of the body, or in all four limbs.

Mixed Cerebral Palsy occurs due to brain damage during pregnancy or at birth. Factors that can cause brain damage of this type include:

In some cases, the brain damage could be owing to medical negligence on the attending doctor’s part. If parents can prove that this was the case, they can potentially sue the doctor for medical malpractice.

It is generally recommended that your child undergoes a developmental screening at 9, 18, and 24 months of age. If your young child has been demonstrating the symptoms of mixed CP, it is important to consult the pediatrician as soon as possible. The pediatrician will closely examine your child and ask you questions about their medical history – when the symptoms first began, how frequently they occur, how mild or severe they are, and so on. You will also need to mention any important developmental milestones they have missed.

If the pediatrician has reason to suspect mixed CP, they will recommend you to a team of specialists. This team will typically include a neurologist, a geneticist, a developmental behavior specialist, and an orthopedic surgeon. The neurologist, in particular, will assess your child for signs of brain damage and use a variety of tests to evaluate their reflexes, posture, muscle tone, gait, and coordination.

Quite often, the symptoms of mixed tone Cerebral Palsy may mimic other movement or neurological conditions. Getting a final verdict, therefore, may take up to months or even a few years. While this wait can be challenging for parents, it is essential to exercise patience, as an accurate diagnosis is crucial for determining the course of treatment.

Treatment for mixed type Cerebral Palsy involves therapy options to manage the pain and ensure as much mobility and independence as possible. The doctor will work with your family to design a tailored treatment program depending on your child’s exact symptoms. The typical components of a program for mixed CP include:

What are three early signs of Cerebral Palsy?

Some of the early symptoms of Cerebral Palsy include abnormal muscle tone, unusual gait, and delays in reaching developmental milestones like rolling over or crawling.

What is the mildest form of Cerebral Palsy?

In certain cases, the brain damage sustained by the child is mild enough that the symptoms do not become apparent until the child is much older, when motor disabilities become visible. Children with mild Cerebral Palsy can usually get by with milder forms of treatment.

What is Ataxic Cerebral Palsy?

Some of the Cerebral Palsy symptoms that parents should watch out for in babies include unusual posture or movements, spasticity or floppiness in the limbs, exaggerated reflexes, and delays in hitting developmental milestones.

Can a baby with Cerebral Palsy do tummy time?

Tummy time is a quick and easy form of home therapy for young children with Cerebral Palsy. It provides a stretch to the back and the knees that helps prevent postural deformities, improve balance, and develop better head and neck control.

How does a child with Cerebral Palsy walk?

Around half of all children with Cerebral Palsy are able to walk independently with proper Physical Therapy. One in 10 children will use some form of mobility device.

Does Cerebral Palsy affect the eyes?

Visual problems are among the common complications in Cerebral Palsy, and can take the form of cataracts, strabismus (turned eye), and refractive problems. Surgery can help to fix many of these.

A normally developing baby should be able to smile from around three months of age. While not smiling does not necessarily indicate Cerebral Palsy, it could point to some developmental issue and is worth taking note of.

Is Cerebral Palsy obvious from birth?

The signs and symptoms of Cerebral Palsy tend to appear over time as the child grows. In severe cases, however, some signs like poor muscle tone or limb deformities may be noticeable at birth.

Can Cerebral Palsy cause a lazy eye?

Children with Cerebral Palsy frequently display vision problems. Lazy eye, or amblyopia, may occur due to an imbalance in the muscles that keep the eyes in place, hindering them from working together and affecting visual ability.

Spastic Cerebral Palsy occurs due to damage to the pyramidal tracts and/or the motor cortex of the brain. It is the most common form of Cerebral Palsy.

How old is the oldest person with Cerebral Palsy?

In conclusion, finding out that your child has mixed CP disease can be tough. However, it is important to remember that your child needs your love and patience more than ever. Work with the child’s doctor to secure the best possible treatment for them early on. Soon enough, your child will start benefiting from therapy and enjoying a happy, pain-free life side by side with their peers.