ADHD Or Autism: What Does My Child Have? 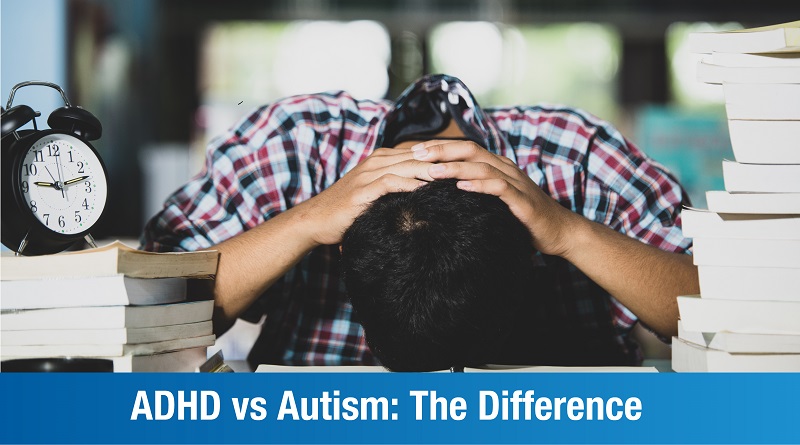 If you see your child having trouble coping with school activities and displaying impulsive behavior, it is only natural to wonder what they are dealing with. Both ADHD and Autism are neurodevelopmental conditions that affect social interactions and make things like schoolwork, or maintaining friendships, that much harder. The two conditions, however, are entirely distinct and require different forms of treatment to maximize the child’s potential. Here, we offer a quick guide to the difference between ADHD and Autism.

Attention Deficit Hyperactivity Disorder (ADHD) is one of the most common neurodevelopmental conditions among children around the world. Its chief symptom is inattention, along with a tendency to daydream and be restless. While some amount of inattentiveness and restlessness may be normal, children with ADHD are unable to overcome these traits on their own even when they get older. Children also tend to be overtly active, to the point of doing reckless things or acting without thinking their actions through.

Autism or Autism Spectrum Disorder (ASD) refers to a range of neurodevelopmental disorders that affect social, behavioral, and communicative abilities. Children with Autism often have trouble with verbal and nonverbal communication, as well as heightened sensitivity to sounds, smells, or colors. Since it is a spectrum disorder, no two children’s symptoms are exactly alike. Treatment for Autism can involve a combination of Stem Cell Therapy, Behavioral Therapy, Social Skills Therapy, and Occupational Therapy.

ADHD vs Autism: Telling them apart

There are several things that ADHD and Autism have in common. In fact, a child may even have both ADHD as well as Autism. Medical specialists continue to research the overlap between the conditions, with current estimates showing that 30-50% of children with Autism also have symptoms of ADHD. Some of the symptoms that a child with either condition might display include:

There are, however, distinct symptoms that set each condition apart. When trying to determine between ADHD and Autism as an explanation for your child’s behavioral tendencies, keep the following in mind.

If you suspect that your child may have either ADHD or Autism, it is essential to take them for a check-up as soon as possible. The doctor may observe the child’s behavior and collect feedback from you and other caregivers and teachers, either verbally or through formal surveys. Then, once you have a diagnosis, your child can start tailored treatment as recommended by a therapist. Above all, remember that your child deserves patience, support, and demonstrations of love, just like any other child. This will enable them to do their best and keep adjusting better every day, while remaining their unique selves.

Plexus Neuro and Stem Cell Research Centre have solutions that will get your child smiling again with confidence. If you have any questions or are looking for Autism or ADHD treatment, we are here to help! All you have to do is give us a call or schedule an appointment with us today.