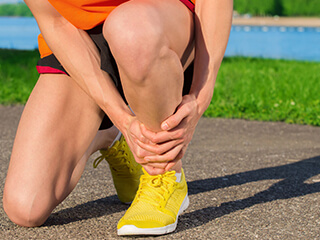 The most common sports-related injuries include:

Strains & Sprains
Strains and sprains are the common sport injuries reported so far. These can occur while being involved in any type of sports injury. So far, these are the most familiar sports injury and can take place in almost any kind of physical activity.

A sprain is likely to occur when a ligament tears or overstretches. Sprains can range from small to complete tears wherein the ligament is severed. Wrists, knees and ankles are the common most areas that are prone to sprains. On the other hand, a strain is a pulled muscle that occurs when fibers within a tendon or muscle stretch too far or ratherc tear. Strains can range from being minor to severe.

Shin Splints
A shin splint involves pain along the tibia (shin bone). The pain is generally at the posterior part of the lower leg, however, can also occur in the ankle and foot or in parts where the bone meets calf muscles at the bone’s inner edge (medial shin splints).
Shin splints are pretty common with runners & even more-so when a runner runs on hard surfaces. Improper running techniques, failing to stretch or warm up, running in shoes which lack proper support or possessing “flat feet” – all can lead to shin splints.

Fractures
Fractures are commonly called as broken bones and are a common sports injury generally caused by a small one-time injury to the bone (acute fracture). Sometimes, repeated stress over a bone (stress fracture) also occurs.
Most of the fractures are classified as emergencies & may even require surgery to fully repair. A stress fracture is likely to occur most of the time in feet or legs from sports which cause repetitive impact like a jumping or running sport.

Dislocations
Dislocations take place when force pushes the bones out of alignment in a joint. Dislocations are also referred to as luxation. Contact sports like football or an activity like excessive stretching or falling also can cause dislocations. A dislocation will generally need medical treatment & is treated as an emergency. The bone that is dislocated can be put back in place, however, the connective tissue that surrounds the joint suffer severe damage. The common joints which are mostly dislocated include those of the fingers and hand, especially with the shoulder located close behind. Knees, elbows, and hips can also be dislocated but tend to be less common.