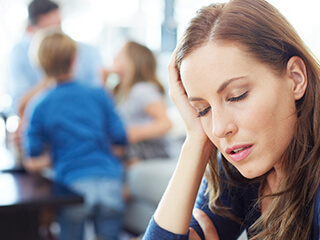 Chronic fatigue syndrome (CFS) is a somewhat complicated medical condition that is characterized by extreme fatigue that has no apparent link to any underlying disease within the patient. The debilitating fatigue or tiredness may worsen with physical or mental activity and doesn’t get better with rest. This condition is very hard to explain and reduces the quality of life of the person as well as limiting their ability of carrying out daily activities.

This syndrome has also been referred to as myalgic encephalomyelitis or as systemic exertion intolerance disease; although all three share the same major symptoms, there are slight variations between the three disorders. It’s been suggested that more than one underlying condition may be responsible for CFS and these could include biological, infections, genetic or psychological factors.

Aside from the main symptom of fatigue, CFS has eight official symptoms that are central to its classification; these include memory or concentration loss, enlarged and tender neck and armpit lymph nodes, sore throat, variant headaches, unexplained muscle pain, multi-joint pains without swelling or redness, un-refreshing sleep and extreme exhaustion after physical or mental activities.

The symptoms of CFS vary in each individual but for proper classification as CFS, fatigue and at least four of the above symptoms must exist in the patient for at least six months. Since CFS follows a cycle of remission and relapse, it becomes difficult to treat these patients.

In earlier days, CFS was considered a controversial diagnosis but it is now recognized as a real medical condition that can affect anyone; it’s however more commonly seen in women as compared to men and the age when it’s more prevalent is in people in their 40s’ and 50s’.

As with the diagnosis, the cause for CFS is also controversial and largely unconfirmed. It’s been speculated to be related to hypotension, weak immune system, genetic predisposition and hormonal imbalances. CFS could be the end-result of multiple different conditions as it’s been noted that about 10-12% of people with Epstein-Barr virus, Ross River virus and Coxiella burnetti infections go on to develop symptoms that resemble the criteria needed for a diagnosis of CFS.

Certain complications can develop with CFS and include depression, social isolation, lifestyle changes as well as incompetency at work. This rings a bell for urgent medical attention and treatment which usually focuses on relieving symptoms only. Anti-depressants and sleeping pills are the main medications used to relieve the patient as there is no known cure. The patient is also advised about self-care measures to reduce stress, restrict use of stimulants, have a paced routine and undergo physical and psychological therapy.
Alternative therapies like acupuncture, massage and yoga are being promoted for controlling the pain. Its however difficult to determine what will work as the symptoms are linked to the mood of the patient and vary day-to-day.