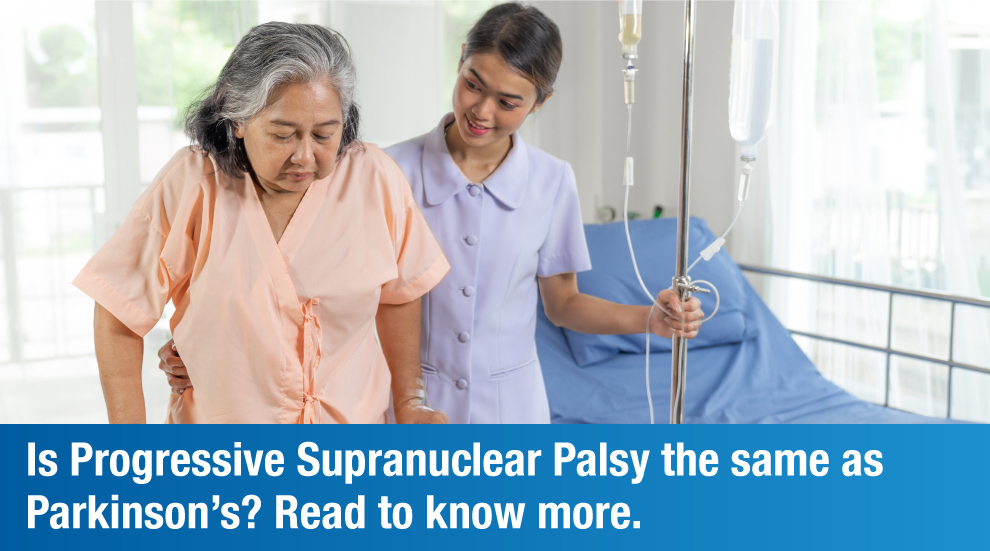 You may have heard of Parkinson’s Disease — a neurological disorder that affects nearly 10 million people worldwide. But did you know that sometimes what seems to be an open and shut case of Parkinson’s Disease might be something much more uncommon? It could be Progressive Supranuclear Palsy (PSP). The two are very similar in how they present themselves, and both can cause serious, life-long problems. But there are subtle differences between the two. Let’s take a deeper look at PSP and its treatment — and how it compares to the treatment of Parkinson’s Disease.

Progressive Supranuclear Palsy is an uncommon brain disease that significantly affects your motor control. A person with this condition will face serious problems with walking, balance, eye-movement, and swallowing.

The condition is caused by the degradation of brain cells that control body movement. It is a disease that worsens over time and can lead to life-long and life-threatening complications such as pneumonia and difficulty swallowing.

These symptoms will gradually lead to the patient experiencing:

In its most advanced stages, these symptoms progress to increasingly slowed and slurred speech hindering communication. Loss of control in the throat muscles can lead

to severe swallowing issues and may require the insertion of a feeding tube to prevent choking and chest infections. Many patients may also suffer from loss of control over their bladder and bowels. There is also a mental toll — the patient will face problems with thinking, concentration, and memory, though they usually won’t lose complete awareness of themselves.

PSP vs Parkinson’s Disease You may notice that many of the symptoms listed above are similar to those present in patients with Parkinson’s Disease, a more common neurological condition. After all, both PSP and Parkinson’s are characterized by parkinsonism — stiffness, slowness, and clumsiness in movement. In fact, PSP can often be misdiagnosed as Parkinson’s due to how uncommon the disease is. But while the two are similar, they aren’t quite the same.

Tremors Present in over 70% of cases

Present in under 10% of cases

Balance A tendency to bend forwards

A tendency to either stand straight or tilt backward

Sense of Smell Degrades over time Tends to remain the same

Characterized by a complex interaction by multiple chemicals and brain structures

The treatment of PSP does share some similarities with the treatment of Parkinson’s Disease. However, since some symptoms are present more severely in PSP, there are some specific differences in treatment.

Most patients will be working with a multidisciplinary team of neurologists, social workers, ophthalmologists, dieticians, and therapists (speech, occupation, and physio) to create a treatment plan. There is currently no real cure for PSP, most treatments involve mitigating the symptoms as much as possible. If you suffer from PSP, your treatment plan might include:

Living with Progressive Supranuclear Palsy is difficult and often frightening, but remember that you’re not alone in this experience. Creating a support system both in your personal life and treatment journey can go a long way in helping you cope with the condition. Confide in your friends and family, and look into rehabilitation centers that offer treatment of Parkinson’s Disease and PSP — start building your network of care today.