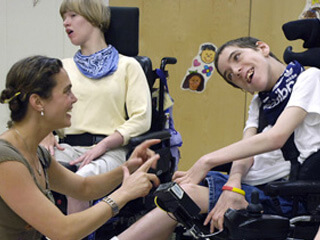 Cerebral Palsy is a neurological disorder that affects the brain and nervous system of a human being during infancy. Cerebral Palsy occurs due to insufficient supply of oxygen to the brain during birth.

According to dictionary, the term ‘Cerebral’ refers to that area of the brain which is affected and Palsy means complete or partial muscle paralysis, often accompanied by loss of sensation and uncontrollable body movements or tremors. This means a child suffering from cerebral palsy would experience delay in development of significant milestones in his/her life.

Some of the symptoms of a child suffering from Cerebral Palsy are as follows:

There are several types of Cerebral Palsy:

The major cause of Cerebral Palsy is deprivation of oxygen in the brain during labour and delivery.

There are also some cases of cerebral palsy where damage to the brain occurs during the first six months of pregnancy.

According to experts a premature baby or a low weight baby will raise the risk of cerebral palsy. Besides there are other factors like multiple births, sexually transmitted disease (STDs), damaged placenta, consumption of alcohol by the pregnant mother, consumption of illegal drugs by the pregnant mother etc. where chances of cerebral palsy runs high.

There are also some cases where cerebral palsy occurs after birth. This could be because of meningitis, a head injury or poisoning.

Cerebral Palsy (CP) is one of the most common disorders affecting children across the world hence management of CP is very complex and challenging. Moreover, CP cannot be cured but it can be managed through a comprehensive approach. Firstly the needs of the child should be identified and there on treatment should be provided.

In the treatment of CP, a range of methods including physical therapy, medical, surgical, technical etc. can be utilized.

Physical therapy is the most common form of treatment in CP where physiotherapists and occupational therapists work towards improving movement and mobility of a child. They also work on improvisation of speech and communication skills. Physical therapy is important because in some cases it can also prevent surgery.

Medicines could be another method of treatment where medical professionals will prescribe medicines as per the requirement of an individual. Neurologists and Psychiatrists play significant roles in the management of these kind of medicines.

Surgery could be the last resort in CP. One must understand that it is more important to manage a child with CP and not correcting deformities.

Assistive technology is another method of treating CP. Many people suffering from CP use special devices like crutches, special seats, wheelchairs, casts, special shoes etc. to improve upon their functional impairments.

While a lot of care is required for a child suffering from Cerebral Palsy, it must be understood that the main objective is to help the child achieve as much independence as possible throughout his/her life.