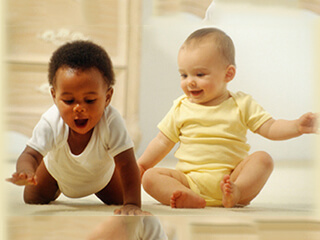 Infantile spasms were first diagnosed in 1841 and represent a rare form of seizure disorder that affects very young children. The average age of presentation is four months, although some children have been known to start presenting symptoms from as early as one month of age and a few up to the age of 2 years.

As the symptoms are very subtle, it’s difficult for parents to recognize it as a serious problem. Most people think of seizure disorders in terms of someone falling down and having full-body convulsions. In infantile spasms disorder (IS) this is not the case; it’s usually described as ‘bobbings’ that involve the complete head heaving forward towards the knees and then relaxing into the normal straight position. These ‘bowings’ and ‘relaxings’ occur repeatedly in rows with few second intervals and could last about 2-3 minutes. These clusters of spasms occur several times a day and an EEG performed on such children throws up hypsarrythmia between and during the spasms. Such children may also have underlying neurological and developmental problems. In very young children, IS may present as little head drops that do not appear too serious; even the pediatrician might not be able to pick it up as they resemble the normal startle reflex. Due to the abnormal positioning of the body during spasms, infantile spasms have been variously describes as ‘salaam seizures’, ‘nodding spasms’, ‘jack-knife spasms’, ‘West syndrome’ and ‘infantile spastic epilepsy’.

Though it’s difficult to diagnose, its best to start treatment at the earliest with anti-convulsing medications as the longer the child goes untreated, the greater the chances for other developmental disabilities and autism. There are over 200 disorders associated with IS and some of these include brain tumors or cysts, metabolic conditions, tuberous sclerosis, genetic abnormalities, brain malformations and brain injuries due to a variety of causes including brain infections, trauma or low oxygen at birth. With progress in neuroimaging technology (MRI and CT scans), the proportion of confirmed cases of IS has increased over the years. Studies have shown that one in every 2,200-4,500 children born, have IS and boys are more prone to developing this disorder than girls.

Proof for determining the presence of infantile spasms lies in the EEG pattern which usually show a characteristic random high-voltage slow waves and spikes that are almost continuous and known as hypsarrythmia.

Treatment is usually successful with anti-convulsing medications and associated injections of ACTH hormone; it takes about 1-2 weeks before the child starts showing improvement. However, if there is another underlying cause for the IS, like the presence of brain tumors or cysts, then these need to be surgically removed first.
IS normally disappears after the age of 3-4 years, though it may reappear as a part of epilepsy syndrome in later years in a few people.