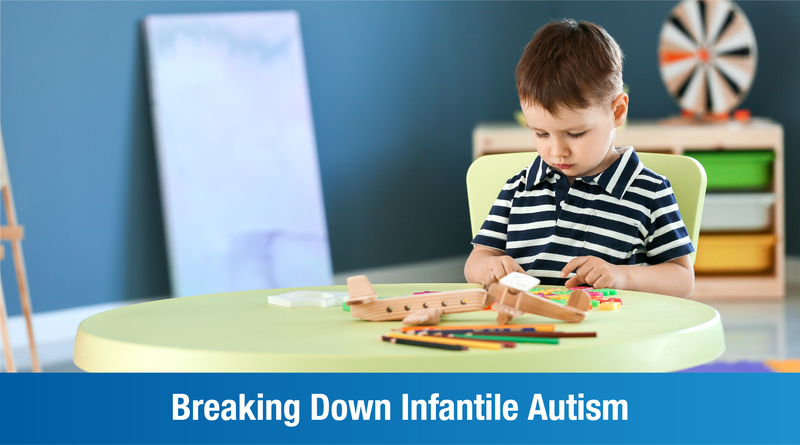 Autism Spectrum Disorder is a neurodevelopmental condition that most people associate with young children. But did you know that babies can have Autism too? The signs aren’t always as obvious as for older children, but getting an Infantile Autism diagnosis early on can be crucial for your child’s development. Here, we offer a brief introduction to what Infantile Autism looks like and the signs to watch out for.

Infantile Autism refers to the infancy stage of a case of Autism. Autism Spectrum Disorder (ASD) refers to a range of neurodevelopmental disorders that affect social, behavioral, and communicative abilities. Children with Autism tend to display significant behavioral and social differences from other children, including speech or language delays and an impaired ability to understand and respond to emotions. Treatment for the condition, in the form of Behavioral Therapy, Occupational Therapy, Social Skills Therapy, and Stem Cell Therapy can help children manage symptoms to where they can function independently and happily.

Infantile Autism isn’t separate from ‘regular’ Autism, as children and adults with Autism were born with the condition and had the symptoms. In fact, many symptoms of Autism are possible to detect in the first year of life, even if they aren’t that noticeable. The phenomenon was first described by psychiatrist Leo Kanner as ‘early infantile autism’ to describe the presence of antisocial behaviors and repetitive interests right from birth in a set of children he was studying. Today, the terms Infantile Autism and Autism are used interchangeably to describe Autism in babies.

Signs of Autism in Infants

Nobody quite knows the exact cause of Infantile Autism yet. Genetics, environmental factors, low birth weight, certain maternal infections, and exposure to toxins are some of the risk factors that could lead to Autism in infants.

Infantile Autism does not affect a baby’s physical appearance, and symptoms related to verbalizing and social behavior tend to emerge when the child is older. Detecting signs of Autism in infants, therefore, can be tough. However, the CDC has laid out some developmental milestones that parents can track their child\’s progress against while bearing in mind that every infant is different and some may simply hit some milestones later than others. Here are the signs of Autism in babies to watch out for.

As the parent, you need to trust your instincts about your baby’s behavior and consult a doctor if you believe you’re seeing early infantile Autism symptoms. In any case, the American Academy of Pediatrics recommends that you get a developmental screening for your infant when they are nine months of age.

The earlier the intervention, the better the chance of managing the symptoms. Your pediatrician will conduct a variety of tests on your baby to determine the best course of treatment if they do indeed have Infantile Autism. However, they may refrain from giving an official diagnosis until much later, simply because it can be hard to reach anything conclusive until the child is older and is displaying more obvious symptoms.

Once there is a conclusive diagnosis, there are several treatment options for Infantile Autism. These include:

The exact composition of the treatment plan will depend on the early infantile Autism symptoms your child is displaying. For example, some children will be completely nonverbal all their lives. In that case, speech therapists will work on teaching them alternative forms of communication through cue cards, sign language, or the use of electronic devices. In addition, remember that the treatment plan can evolve as your child grows older and makes progress across the behavioral spectrum.

It is vital for parents to remember here that infantile Autism is no one’s fault. Many parents may question their parenting decisions if they observe signs of Autism in infants. If you are feeling that way, consider joining Autism support groups where you can meet other parents going through similar experiences. You can also talk to a counselor or therapist to process your feelings and pick up stress management tips. Reading up as much as you can about infantile Autism will help you feel more in control of the diagnosis, treatment, and home care process.

Alternative terms by which doctors describe Autism include Autism Disorder and Infantile Autism. The latter is not a separate condition.

Babies with Autism tend to have difficulty showing expressions and/or affection. They may not respond when their name is called and may either not speak or take unusually long to say their first word. They also have limited eye contact and do not point to objects as neurotypical babies do.

Every case of Autism is unique, and one child may have certain symptoms that another child never displays. In addition, there are some symptoms that might look like Autism but actually point to other conditions altogether. Lack of attention, for instance, is something that Autism and ADHD patients have in common.

In general, conclusive symptoms of Autism become evident when the child is 18 to 24 months of age, although some children may display symptoms as early as 12 months.

Children with Autism who have received comprehensive treatment from an early age may eventually pick up the social and behavioral skills they need to transition into regular school.

Growing awareness about what Autism is and evolution in the diagnostic criteria mean that more people are getting diagnosed with Autism now.

Autism is a condition children are born with and will have their entire lives.

Certain genetic mutations have been identified as responsible for Autism being passed on to boy children more than girl children. However, often boys are diagnosed more often than girls simply because of cultural or social differences in the way the genders are expected to behave. Being withdrawn or not making eye contact, for instance, could be viewed positively as modesty in girls.

The risk of Autism is certainly higher if one has an immediate family member with the condition, although the exact genetic patterns are not fully known yet.

Studies have shown that children with an autistic parent are nine times as likely to have Autism as those with neurotypical parents. It is perfectly possible, however, for two autistic parents to raise a child if they are on the high-functioning side of the spectrum.

While there is no way at present to detect infantile Autism in the womb, new studies are showing that children with Autism tend to have faster-developing bodies and brains at the beginning of the second trimester as compared to neurotypical children.

Studies indicate that fathers pass on more of the genetic mutations responsible for Autism than mothers do. However, this certainly does not mean that the father is ‘responsible’ for the infantile Autism diagnosis.

The idea that your child may have infantile Autism is a worrisome one, and it is normal to be concerned if your baby isn’t developing quite as fast as you’d like. That’s why you should keep monitoring your child’s behavior and consulting the pediatrician about any delays. Even if it isn’t Autism, catching delays early can help to treat other causes that could be responsible. Moreover, if your child indeed has infantile Autism, there are several excellent treatment options that you can opt for to ensure that they grow up functional, independent, and happy.