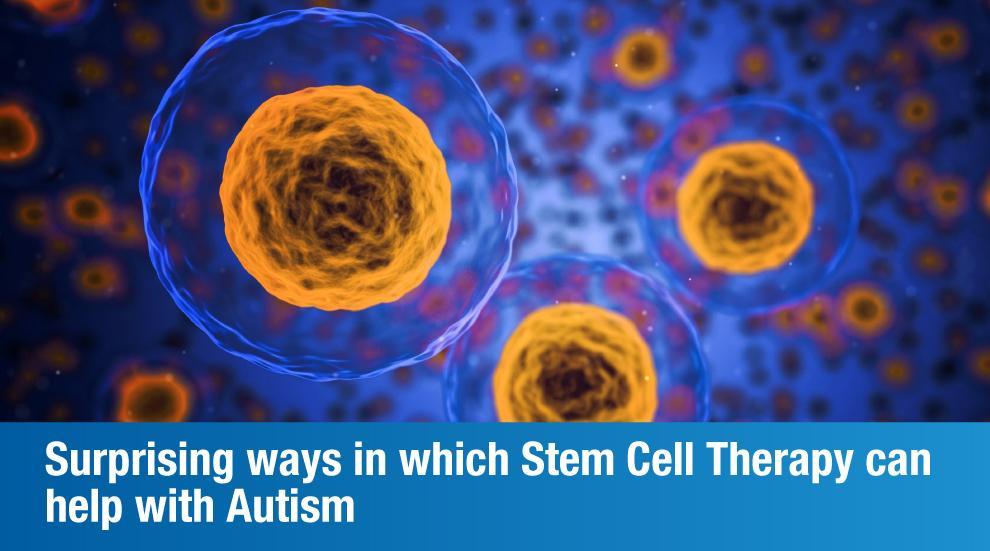 Autism or Autism Spectrum Disorder (ASD) refers to a range of neurodevelopmental disorders that affect social, behavioral, and communication abilities. The causes of Autism are unknown in most cases, although environmental and genetic factors are said to play a role.

Children with Autism display significant difficulties with communication, processing emotion, and functioning in social circles. They also often have sensory processing issues when exposed to different environments. As a result, they can find it difficult to express themselves through words, gestures, or facial expressions. Autism affects about one to two percent of the population worldwide and is equally prevalent among all ethnic and racial groups. Autism in India affects about one in every 500 people.

Autism can take a variety of forms, from mild cases to severe disorders that require round-the-clock care. While there is no Autism cure, recent advances in Autism treatment have made it possible for children to enhance their social and behavioral skills early on and help them enjoy a healthy social life with their peers.

In particular, Stem Cell Therapy for Autism has been recognised as an effective way to address the root physiological causes of Autism, and potentially reverse several of its symptoms.. Read on to learn more about how Stem Cell Therapy treats Autism and how you can sign your child up for the best stem cell for Autism in India.

There is still no clear agreement as to what exactly causes Autism in children. The Centers for Disease Control and Prevention (CDC) mentions a number of risk factors, including:

In general, the National Institute of Neurological Disorders and Stroke (NINDS) states that both environmental and genetic factors usually play a role in the occurrence of Autism.

Autism is a spectrum disorder, which means that the types and severity of symptoms will be different for each child. Broadly, there are four types of Autism that your doctor may diagnose:

It is important to note that these distinctions of Autism are no longer used widely, and all of them are classified under Autism Spectrum Disorder.

The American Academy of Pediatrics strongly recommends screening for Autism as early as possible for treatment to have maximum benefit. It is important to remember that each child is different, and the symptoms that two children with Autism will have may vary greatly.

However, there are certain behavioral traits that are widely regarded as indicators of Autism and worth checking. While most cases of Autism are diagnosed when the child is between one and three years of age, there are several early warning signs that the CDC has specified as possible signs of Autism. In fact, many parents have reported spotting the first signs of Autism before their child was 12 months old.

Here’s an overview of the symptoms that your child may display during the initial months.

Getting an Autism diagnosis

If as a parent you are concerned about any of these symptoms in your child, you should take them to a specialist doctor. The doctor will conduct a variety of tests to assess the degree of developmental delay and rule out possible causes other than Autism for the same. These tests may include:

If your child does have Autism, the doctor will prescribe the best Autism treatment therapy based on their individual needs and symptoms. Current treatments for Autism typically consist of Stem Cell Therapy, Behavioral Therapy, Occupational Therapy, Social Skills Training and Speech Therapy. All of these therapies serve to assist your child with expressing themselves better and with feeling more comfortable in social situations.

As a parent, it is also essential that you read up as much as you can about Autism, its symptoms and effects, and the forms of treatment available so that you can make an informed decision about the best Autism clinic in India for your child.

Autism treatment therapy has advanced greatly in recent years and it is certainly possible for children to have a healthy and fulfilling life by managing their symptoms. The best treatment for Autism will usually consist of a combination of the following therapies, depending on what symptoms your child has and what they respond best to.

Through consistent speech therapy, children with Autism can catch up on language developmental delays. This form of Autism treatment can also help to correct any swallowing disorders

Another type of visual-based therapy is the Picture Exchange Communication System (PECS), which helps children communicate through special symbols. Through guided special education, the child with Autism has a higher chance of reintegrating into a traditional school setup faster. It also improves the child’s self-esteem and reduces the frustration and anger that may happen as a result of being unable to perform classroom task

However, before making any such modifications, it is important to take a doctor’s approval so that your child continues to get the vitamins and minerals they need. In particular, some research has shown that children with Autism tend to have thinner bones than usual, so talk to your doctor about incorporating bone-building nutrients into your child’s meal plan. Overall, a diet that is rich in immunity-building foods will improve your child’s overall health and fitness and thus help them respond better to Stem Cell Therapy for Autism

Sensory integration therapy typically involves exposing your child to a variety of textures and products to handle, taste, smell, hear, and see. It is the best treatment for Autism to ease your child into a calm frame of mind so that they can concentrate on schoolwork and other activities. Additionally, it also reduces the occurrence of tantrums, roughhousing, and meltdowns that happen due to poor ability to cope with sensory input

How Stem Cell Therapy is used in the treatment of Autism

As a parent, if you notice Autism symptoms in your child such as delayed developmental milestones, inability to meet the eye, lack of babbling, lack of response to the child’s name being said, and so on, the first step is to contact a pediatrician for a confirmed Autism diagnosis. After evaluating your child’s symptoms and assessing the severity of brain damage, the pediatrician will work with you to decide on the best Stem Cell Therapy for Autism for your child. While it is not true that Autism is curable with early intervention, it is certainly highly treatable with the right kinds of therapy and Stem Cell Therapy in particular.

The use of Stem Cell Therapy became popular in the late 1990s and the early 2000s as a way to treat rare metabolic disorders. After witnessing breakthrough results in reversing cognitive decline, it was speculated that Stem Cell Therapy could also be effective as a treatment for neurodevelopmental disorders like Autism. Several clinical trials have in fact demonstrated the efficacy of Stem Cell Therapy in Autism. It is rapidly becoming a favored treatment option in India for children with Autism to help them develop the functional abilities they need.

Unlike typical forms of Autism treatment therapy, stem cell treatment targets the core disease pathology and is therefore a crucial first step towards giving an affirmative answer to the question ‘can Autism be cured’. Essentially, Autism stem cell treatment involves harvesting the cells either from the patient or from someone else, mixing it with growth factors and hormones as needed, and then injecting or infusing the cells through controlled doses over several days or weeks. The more these cells are administered, the better they can gravitate towards the damaged area and heal it.

Most medical Autism treatment involves the use of anti-inflammatory agents, antibiotics, and hyperbaric oxygen to alleviate and reverse the symptoms. However, these current treatments for Autism do not focus on the root causes of Autism symptoms, namely immune degeneration and deprivation of oxygen to the brain, both of which are directly linked to impaired brain function. In recent years, Stem Cell Therapy has come into the limelight as one of the best Autism treatments in India and the first step towards a potential Autism cure. Stem Cell Therapy for Autism is minimally invasive and a safe option that can significantly reduce your child’s Autism symptoms.

In one popular type of Stem Cell Therapy for Autism, the stem cells used are derived from human umbilical cord tissue, donated by mothers after healthy live births. These stem cells are scanned thoroughly for viruses and bacteria before being approved for use in Autism treatment. Stem cells from umbilical cord tissue are ideal for treating Autism as it removes the need to collect stem cells from the patient, which can be a tedious and unpleasant process for young children and their parents. Physicians can easily administer these cells in uniform doses over the course of several days, with as high a concentration of stem cells in each dose as needed.

This is a highly effective form of Stem Cell Therapy for Autism in India. Stem cells possess the unique property to morph into different cells and structure-specialized cells from the original mother cell. These stem cells from bone marrow tissue have the capacity to repair root-level neural damage at the molecular, functional, and structural levels. They can also regulate cell differentiation, anti-inflammatory action, and organ and tissue repair.

Children with Autism who have received bone marrow stem cell treatments have shown significant improvement in behavioral patterns like hyperactivity and repetitive motor mannerisms, as well as sensory processing abilities. Improved eye contact, less aggressive behaviour, stronger speech and communication skills, and reduced self-stimulating behaviours are some of the other results observed in children after Stem Cell Treatment for Autism in India. Bone marrow tissue may be autologous (taken from the patient’s own body) or allogeneic (taken from a third-party after suitable tissue matching).

As the parent of a child with Autism, it is essential that you read up as much as you can about Stem Cell Therapy for Autism, including peer-reviewed journals where the information is far likelier to be accurate than in videos created by amateurs. You should also ask the right questions at the Autism clinic in India, such as

It is also important to be aware of the side effects of Autism stem cell treatment, such as the patient’s body rejecting the donor cells or even being attacked by them as a result of donor-graft disease, a potentially dangerous condition.

Cost of Stem Cell Therapy for Autism in India

Stem Cell Therapy is a highly complex process that requires trained professionals and suitable physical and emotional care for the patient both during and after the procedure. While the Autism stem cell treatment cost in India depends on the type of stem cells used, quality of treatment, overhead costs, expertise of the surgeons and other factors, it is generally an expensive procedure.

A patient can expect to pay about 7000 to 12000 USD as stem cell Autism cost at hospitals in major cities like Mumbai, Bangalore, Chennai or Pune. Even so, the stem cell transplant cost in India is much lower than in countries like the US or the UK, making it a preferred destination for people around the world seeking low-cost Stem Cell Therapy.

At Plexus Neuro and Stem Cell Research Centre in Bangalore, we are committed to ensuring that your child can get the most from recent advances in Autism treatment. Our experienced stem cell therapists make use of autologous bone marrow stem cells to treat patients with Autism. By extracting cells from the patient’s own body, we eliminate the risk of any side effects that may occur when third-party cells are injected into the body.

We also work with you to decide on other forms of Autism treatment therapy for your child, such as Occupational Therapy or Social Skills Therapy. As the best Autism clinic in India, we offer world-class Stem Cell Therapy for Autism and ensure a safe and comfortable environment for you and your child.

Can Autism be cured permanently?
With early intervention, there are high possibilities of curing Autism.