Home / Screening and Diagnosis of Autism Spectrum Disorder: An Overview

Screening and Diagnosis of Autism Spectrum Disorder: An Overview 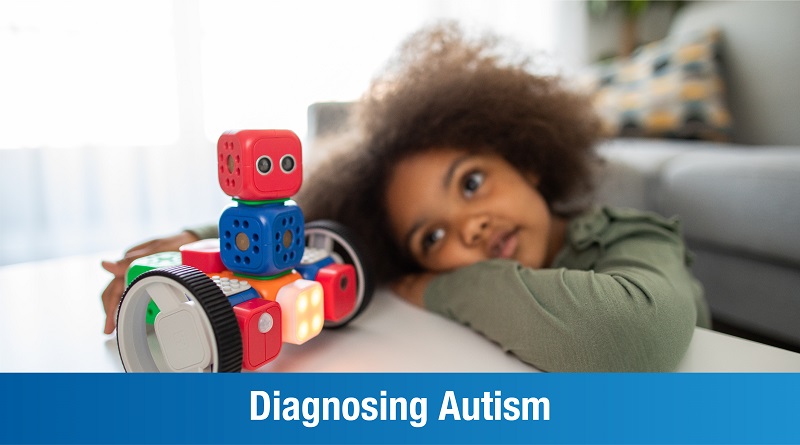 Autism Spectrum Disorder is a neurodevelopmental condition that presents as a variety of social and behavioral challenges. While there is no specific Autism screening test available yet, early intervention is key to understanding your child’s symptoms and determining the kind of treatment needed. Here, we examine how doctors conduct the screening and diagnosis of Autism in young children, with a view to identifying it as early as possible.

Autism or Autism Spectrum Disorder (ASD) refers to a range of neurodevelopmental disorders that affect social, behavioral, and communicative abilities. Children with Autism frequently have trouble communicating with others and adjusting to social situations, and may also have sensory processing disorders. The causes behind Autism are unknown in most cases, with a combination of genetic factors and poor health during pregnancy usually held responsible. Early detection through Autism screening enables maximum benefit for the patient through tailored intervention.

As a spectrum disorder, Autism can present in various ways. There are also other neurodevelopmental disorders that can mimic the symptoms of Autism. Understanding the various types of Autism will help you understand the Autism screening process better and even ask for specific tests for your child as needed. The important types of ASD and related disorders include:

Most specialists today prefer to not use such classifications and to simply diagnose the patient with Autism Spectrum Disorder.

Children with Autism think and learn very differently from their neurotypical peers. While some can function more or less independently as they receive treatment, others will require extensive support all their lives. Depending on the severity of symptoms, Autism Spectrum Disorder is classed into 3 levels by the Diagnostic and Statistical Manual of Mental Disorders (DSM-5).

Because there are no obvious physical delays in aspects like crawling or sitting up, the early symptoms of Autism may go unnoticed for a long time. Parents may assume that their child is simply shy, or hyperactive, if they do not talk or behave as expected. Children with Autism will typically display some or all of the following symptoms:

What to do when you suspect Autism

Early intervention is critical to give your child with Autism the best possible chance at an independent life. The American Academy of Pediatrics (AAP) recommends that all children are given developmental screening at 9, 18, and 30 months of age. Extra screening may be required in case your child has a greater risk of developmental problems because of low birthweight, preterm birth or exposure to toxins like heavy metal.

There is no single medical test to determine the presence of Autism, which is why Autism screening is often a long and complicated process. If your child has been missing developmental milestones or demonstrating the symptoms of Autism, it is essential to consult your pediatrician at once. The pediatrician will monitor your child closely in the clinic setting and even talk or play with them directly to assess their social and behavioral skills.

If the doctor suspects the presence of Autism, they may conduct a formal developmental screening. This type of Autism Spectrum Disorder screening involves answering a questionnaire about the child’s behaviors, emotions, communication, and social skills. If this too presents concern areas, the doctor will recommend you to a specialist, such as a child psychologist, who will conduct a form of Autism screening test known as developmental evaluation. The doctor may use one or more of several structured tests, including observation as well as questionnaires, to determine what the child’s developmental needs are. They may also test the child directly by setting them tasks that evaluate their thinking and decision-making skills. In addition, the specialist will test for any co-occurring conditions that often show up with Autism, such as ADHD, anxiety, or depression.

Diagnosis and treatment of Autism

In general, a diagnosis received when the child is between 18 and 24 months of age can be deemed accurate, as most symptoms will have fully presented by then. However, for those with milder forms of Autism, a diagnosis may not happen until they reach adolescence or even adulthood. Treatment will be tailored to the patient’s symptoms and may include Occupational Therapy, Speech and Language Therapy, Behavioral Therapy, Social Skills Therapy, and so on. Co-occurring conditions will also require their own treatment.

In adults who are newly diagnosed with Autism, treatment will usually focus on the social and behavioral skills they need to fit better into college or the workplace. They may also receive therapy for emotional regulation so that they can maintain relationships better. It can be overwhelming for an adult to hear for the first time that they have Autism. Counseling can help them come to terms with the diagnosis and seek appropriate forms of intervention.

What are the five Autism Spectrum Disorders?

Can Autism be screened during pregnancy?

There is some evidence to show that the brains of infants with Autism may show differences from neurotypical brains during the second trimester of pregnancy. However, in general, prenatal testing is not a reliable way of knowing whether your child will have Autism or not.

Can you be slightly Autistic?

While there is no such thing as being ‘slightly’ or ‘a little’ autistic, many people have a fairly mild version of Autism that involves fewer symptoms. Such people may simply come off as quiet or shy around others, and may avoid certain sensory triggers like bright flashing lights.

Level 2 Autism is in the mid-range of the spectrum. Patients will require fairly substantial support and have obvious symptoms such as highly restricted behaviors or difficulties with communicating verbally.

What is hand flapping?

Hand flapping is one among a set of repetitive behaviors that children with Autism might demonstrate. It manifests as the child moving their arm from the elbow upward, with the hand flipping back and forth at the wrist.

Is Autism a disability?

Autism Spectrum Disorder is classed as a developmental disability. Given that every person’s experience of it is unique, their disability needs will also differ widely.

What are the three main symptoms of Autism in adults?

The key symptoms of Autism in adults include difficulty keeping up a conversation, difficulty understanding non-verbal cues like gestures, and trouble regulating or showing their emotions.

Hand stimming involves hand and finger mannerisms such as flapping or finger flicking. It involves any movement that the patient does over and over, usually at a rapid pace.

What is twirling in Autism?

Twirling is a form of stimming in which the person with Autism keeps going round and round, often for extended periods of time and without awareness of their immediate environment.

At what age is hand flapping a concern?

Many young children may flap their hands during the early phase of development. If they continue to do it after three years of age, however, it is of greater concern and could indicate an underlying condition like Autism.

What is hand leading in Autism?

Many children with Autism use hand leading to interact or communicate with other people. It often happens as a result of speech and language delays.

What does scripting mean in Autism?

Scripting refers to the repetition of words or phrases as said by the other person or by someone on television. Many children with Autism will simply repeat back what they heard when spoken to, rather than giving a suitable answer.

In conclusion, the earlier a child undergoes Autism Spectrum Disorder screening, the sooner they can receive a diagnosis and commence treatment. As a parent, therefore, it is important to carefully monitor your child’s development and promptly consult your pediatrician about any delays you may notice.