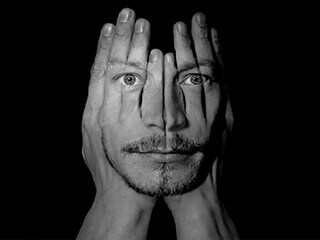 Schizophrenia is a chronic mental disorder that influences the way you think and behave. People affected by schizophrenia can seem like they have lost touch with reality. They experience hallucinations (most commonly reported being, hearing voices), delusions, disorganized thinking and speech. People with schizophrenia are greatly affected socially due to their apparently bizarre behaviour, which can be misconstrued by people they interact with. They eventually fail to distinguish between what is real and what is imagined.

Symptoms of Schizophrenia
Schizophrenia symptoms usually start to show in people between the age of 16 and 30. Symptoms start gradually and progress into adulthood. It is seen among younger children rarely. Symptoms can be categorized as positive (hallucinations, delusions, agitated body movements, unusual thought processes), negative (reduced emotions/speech/expressions, difficulty in starting or following through activities) and cognitive (lack of focus/attention, lack of ability to understand or use information, inability to use information immediately after learning it). Males are more affected than females.

What causes Schizophrenia?
Schizophrenia can be caused due to environmental and genetic reasons. It is known that schizophrenia runs in the family. But sometimes individuals develop symptoms even without a family history of the condition. Also, people with one or more family members who have the condition do not develop schizophrenia themselves. No one gene is attributed to the development of schizophrenia. It is considered that several different genes contribute to the risk. A combination of the genes and some aspects of the environment the person is exposed to can cause the condition to develop. Such environmental factors could be: parent being malnourished during pregnancy, substance abuse, some infections, difficulties during birth, and psychosocial factors. Researchers also suggest that imbalances in brain chemicals can also be a factor in causing schizophrenia.

Diagnosis is arrived at based on behaviour observed and experiences related by the patient.

When schizophrenia is accompanied by depression, it is said to be schizoaffective disorder.

How to manage Schizophrenia
Getting diagnosed as schizophrenic would be a shock to any person. The related symptoms that lead to the diagnosis would already have taken a toll on the individual’s mental and physical health. But getting diagnosed means the patient has crossed the first step towards wellness. This is because more often than not, the symptoms of schizophrenia get dismissed as stress, unwarranted behaviour, or gets confused with signs of other conditions.
Treatment and support can bring the patient’s life back on track, enabling them to lead fulfilling personal and professional relationships, and to be productive. Since the root cause of the development of schizophrenia is still not clearly known, treatment focuses on the management of the symptoms of the condition, lessening their effect on the patient. Current symptoms require treatment, future development of new symptoms need to be prevented, and the patient’s daily life-tasks might need to be organized with support from family, friends and their school/workplace.

Medication and rehabilitation programme, in combination, can help manage schizophrenia and can help the affected person lead a better life. Counselling, support groups, supervised housing programmes for people similarly affected can utilised to ensure a holistic approach towards recovery.

Individuals diagnosed with schizophrenia must first accept the diagnosis and open up communication with the doctor regarding symptoms experienced, difficulties with medication or any other concern. Getting involved in support therapies that suits the patient will help embrace difficulties and overcome them. Patients will learn to motivate themselves and set personal goals and challenges. Making changes to the lifestyle can work in tandem with medication and therapies — eating a balanced diet, avoiding alcohol and drugs, getting regular night-time sleep for a minimum of 8 hours, positive social interaction and plenty of exercise or physical activities.
All this can go a long way in bringing back confidence in the individual and in helping them successfully integrate with the society again.