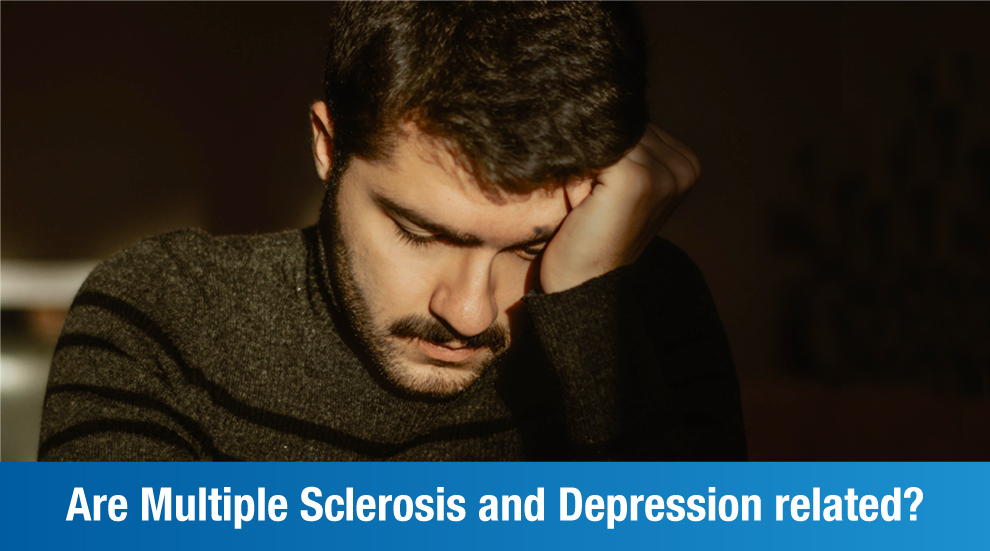 Neurological disorders such as Autism, Parkinson’s Disease, Motor Neuron Disease, and Multiple Sclerosis have the potential to render a patient totally dependent on others. While providing that much-needed attention, caregivers usually focus on the physiological aspects of a disease, often ignoring the accompanying psychological needs of the patient. In this article, we will explain how Multiple Sclerosis, commonly known as MS, could also lead to depression. Let us start by understanding MS and its major symptoms.

What is Multiple Sclerosis?
MS is a disease of the central nervous system that can cause impairments in the body — especially the brain, spinal cord, and optic nerves. Symptoms vary from one person to another, depending on which part of the nervous system has been affected by the disease.

MS is an autoimmune disease — a condition where the immune system of the body attacks healthy tissues. The disease targets a protective layer called myelin that covers the nerve fibers in the brain, spinal cord, and optic nerves. When the myelin is exposed, it gets inflamed and loses strength, and leads to the formation of scar tissues known as sclerosis.

Such damage stops the brain from sending out signals correctly to the rest of the body. As pointed out, every MS patient will have a peculiar set of symptoms, however, a number of general signs can be noted in most. Let’s take a look.

Symptoms
Early signs of Multiple Sclerosis begin to show between ages 20 and 40 and, as is the case with neurological disorders, the symptoms worsen with time. Well, there is no need to panic. Advancements in medical science can now halt the progression of neuropsychiatric disorders. Here is a quick look at the symptoms:

Depression and MS
Now we know what MS can do to a person’s body. Such motor and cognitive dysfunctions can make any person give up, even during the road to recovery. As mentioned earlier, MS destroys myelin, the protective layer around nerve fibers, including the nerves that affect the person’s mood. It is advised to keep the doctor informed about the patient’s mental condition while they are battling MS — timely neuropsychiatric treatment can prevent a mental collapse.

Often tiredness or fatigue, a common symptom of MS, can also be a sign of depression. Likewise, other cognitive-related issues such as indecisiveness or lack of concentration can be a sign of depression. MS can mimic some of these symptoms of depression, making diagnosis difficult. What’s more, as MS impairs memory, attention, and reasoning, it might also have an
adverse effect on a person’s self-image and worth.

But it is not the end of the road. There are certain misconceptions too regarding MS and depression. Let’s bust them.

Everyone with MS will be depressed
No. Symptoms as well as the ability to adapt differ from patient to patient. If one is resilient in coping with stress, the chances of developing depression are very low. Consider this: only 50 percent of people who suffer from MS develop depression that affects their cognitive functioning. In order to avoid that category, consulting a therapist, who will prepare the patient to fight the adversities of MS, is the best option.

People with MS always look and act depressed
This is not true. It seems so because fatigue and difficulty in concentration, which are major symptoms of MS, are also signs of depression. Hence, if an MS patient looks tired or is not able to focus, it doesn’t necessarily mean that they are depressed.

Grief is depression
Losing the ability to walk properly, hampered vision, and feeling tired all the time are likely to make a person sad. But is it always depression? No. Grief is a temporary reaction to loss — whether of a loved one or one’s ability to lead a normal life.

Treatment
Let’s give you some good news. Despite MS being a serious neurological disorder, the progression of such neuropsychiatric diseases can be brought to a halt with timely intervention. At Plexus, an award-winning Neuro and Stem Cell Research Centre, MS is treated with the following therapies:

Stem cell therapy — a non-surgical procedure wherein stem cells are injected into the patient’s body to replace the damaged cells.

Physiotherapy — that improves the patient’s mobility, posture, and balance.

Occupational therapy — that allows the patient to become independent by improving their capability to complete daily activities such as walking, having a meal, or taking a bath.

Speech therapy — that helps the patient regain their communication skills through various techniques including non-verbal communication.

Apart from physical rehabilitation, if the patient develops symptoms of depression, well-trained and experienced therapists are also there to provide the help needed.