Home / Is It Possible To Recover From Autism?

Is It Possible To Recover From Autism? 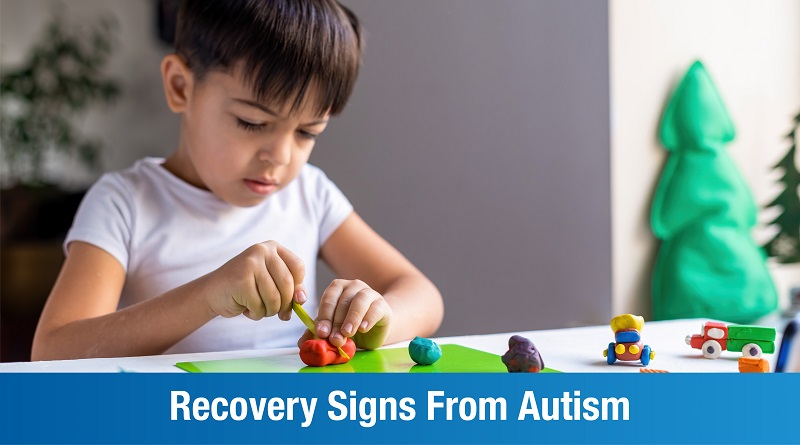 For many decades, a diagnosis of Autism has been assumed to be lifelong. Now, however, there may be some hope for parents and children. Recent research indicates that it may, in fact, be possible for children with Autism to move out of the spectrum if they get the right treatment. Autism recovery signs, however, are not guaranteed and parents should approach such possibilities with caution. Here, we delve deeper into what we know about the condition and separate facts from myths when it comes to recovering from Autism.

Autism or Autism Spectrum Disorder (ASD) refers to a range of neurodevelopmental disorders that affect social, behavioral, and communicative abilities. Children with Autism frequently have trouble communicating with others and adjusting to social situations, and may also have sensory processing disorders. The causes behind Autism are unknown in most cases, with a combination of genetic factors and poor health during pregnancy usually held responsible. Early diagnosis and intervention enables the child to learn the skills they need through Physical Therapy, Behavioral Therapy, Occupational Therapy, and Speech Therapy.

Children with Autism do not have any characteristic facial features and do not have physical delays such as in crawling or sitting up. For this reason, parents may miss the signs of Autism in their child or may assume them to be mere quietness or hyperactivity. Detecting the symptoms early, however, is crucial so that Autism treatment can start early. Typical early signs include:

Diagnosis and treatment for Autism

The American Academy of Pediatrics (AAP) recommends that all children undergo developmental screening at 9, 18, and 30 months of age. It is important to follow this schedule as early intervention can make all the difference for your child with Autism. If your child has been demonstrating the symptoms of Autism or missing important developmental milestones, your pediatrician should screen the child to assess their behavioral and social abilities. If they suspect Autism, they may recommend you to a specialist who will conduct a developmental evaluation. This involves several structured tests such as observation, questionnaires filled by caregivers, and direct interactions with the child to test their thinking, decision-making, and other abilities.

Treatment for Autism is tailored to each child’s symptoms and abilities. Typically, doctors will recommend a range of therapies to help them acquire the necessary life skills. Some of the commonly used Autism treatments include:

Over time, and with the right treatment, children learn to manage their symptoms and regulate their behavior well enough to participate in professional and social situations. In particular, those with Level 1 Autism may learn to integrate so successfully that they are hard to tell apart from their neurotypical peers.

Can one recover from Autism?

At present, it is widely understood that there is no cure for Autism. However, recent data indicates that there may be the hope for a cure for some. At the University of Connecticut, psychologist Deborah Fein and her colleagues, established in a study that about one in five children on the Autism spectrum may later move off that spectrum entirely. To validate the study, an external reviewer assessed her work, which focused on 34 patients between the ages 8 to 21 years who originally had an Autism diagnosis, as well as 34 neurotypical participants. The reviewer correctly determined that the 34 neurotypical people were all non-autistic, while the 34 patients with an Autism diagnosis no longer fulfilled the diagnostic criteria for it. Dr Fein stated that Behavioral Therapy plays a big role in this, especially when started early. Lisa Gilloty of the National Institute of Mental Health and developmental pediatrician Andrew Adesman also state that some children with Autism may eventually move off the spectrum altogether, and have friends and communicate efficiently just the same as their neurotypical peers.

Critics of the research have pointed out that the children who are declared to be ‘cured’ may simply have been misdiagnosed at the onset or may have had a very mild form of Autism. They also add that the study was conducted after the recovery happened, which means that it cannot pinpoint exactly what kind of treatment caused the recovery. Another study at Weill Cornell Medical College, however, is seeking to address this by studying 100 people with Autism from age 2 to their early 20s.

For the layperson, doctors say that it is important for parents to not keep searching for Autism recovery signs in their children. Dr Fein also states that parents should not feel like they have done anything wrong if their children do not recover. Autism remains a condition about which much is yet to be known, and we are a long way out from any conclusive and guaranteed recovery path.

Studies show that Autism symptoms can improve with age. About 30% of children have less severe symptoms at age 6 than at age 3.

At present, there is no complete cure for Autism. The doctors will tailor a treatment program to each child to maximize their ability to learn, interact, and otherwise function well in society.

With early intervention and tailored treatment, children with Autism can learn to manage their symptoms effectively. In particular, those with mild Autism may be able to demonstrate almost fully neurotypical behavior as they grow older.

Autism is a non-progressive condition, which means that it does not worsen over time.

When children with Autism do not receive timely treatment, they may struggle with social and behavioral problems all their lives. They are likely to require significant care well into adulthood and may struggle to hold down a job or maintain relationships.

Adults who have severe Autism may live with their families or in special care facilities, and often require round-the-clock care for basic needs.

If your child with Autism is under 18 and you are a low-income family, you may qualify for Supplemental Security Income (SSI) as per the Social Security Act.

In the United States, over 44% of people with Autism receive some form of postsecondary education, and about 1% to 2% of people in universities consist of those who have Autism.

Many children with Autism do well all the way up to high school, especially if they received treatment early on.

Autism is not an illness the same way Cerebral Palsy or Multiple Sclerosis is an illness. It is, however, a condition that lasts the individual’s entire life.

A good way to get your child with Autism to listen when you are talking is by keeping your responses brief at first and rewarding the child for listening all the way through. Gradually, you can start lengthening your answers.

Some ways to improve your child’s ability to focus include doing more close-ended activities, doing things your child is interested in, and rewarding good behavior.

Doctors have observed several brain abnormalities in those with Autism, including a reduced cerebellum, a smaller volume of the hippocampus, and larger lobes in the cerebrum.

In short, recent studies have shown that a certain fraction of children may demonstrate Autism recovery signs as they get older. However, as the parent of a child with Autism, your best bet is still early intervention and treatment. With time, your child will learn the social and behavioral skills they need to thrive. And the best thing you can do to help them towards that goal is to give them all your patience, love, and affection.