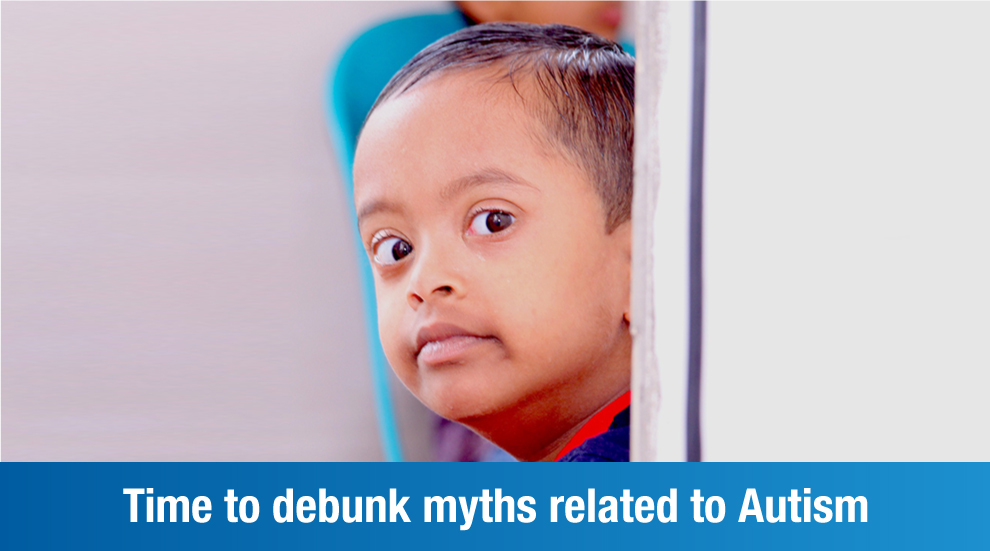 Imagine you’re lost in a foreign country. All you have on you is a guide book, but it’s written in a language you don’t understand. You try to ask people for directions, but most people don’t understand what you want. The ones who do tell you to refer to the guidebook, because everything you need to know is in there. It sounds pretty scary and frustrating, right? This is similar to how people with Autism Spectrum Disorder (ASD) experience the world every day. ASD is a spectrum of cognitive disorders related to brain development that starts in childhood and affects how a person perceives and understands the world around them. Because people with ASD experience the world in a unique way, they exhibit abnormal social behaviors and often have difficulty communicating with others. People who don’t have the condition may find it difficult to understand what it’s like living with ASD. This lack of understanding has lead to a lot of misinformation around the disorder. So let’s take a minute to clear the air, and bust five myths surrounding ASD — from Savant Syndrome to Stem Cell Therapy for Autism.

Myth 1: Every person with ASD experiences it the same way

As the name suggests, ASD is a spectrum. No two people with the condition experience it the same way. Children with ASD might exhibit different symptoms from each other or have different ways of coping with the stimuli the world throws at them. That’s why it’s important to look at people with ASD as individuals first, rather than as a collective representation of a disorder. You’ll need to understand their individual needs, what kind of stimuli or interactions are manageable, and how to communicate on their terms. This why individual therapy and one-on-one classes are just as important as group interactions for children with ASD. What applies to one person will not necessarily apply to another.

Myth 2: Every person with ASD is either secretly a genius or mentally inadequate

This is one of the paradoxes of the perception of ASD — with many people believing that the latter is the norm. In reality, people with ASD are just as intellectually capable as everyone else, they just may have difficulty expressing themselves. On the other end of the spectrum is the ‘Autistic Savant’ trope that is constantly pushed by media and pop culture. Rain Man is one of the most well-known examples, but Sheldon Cooper, from the Big Bang Theory, and Sherlock Holmes, from the BBC adaption, are implied to be this way as well. While some people with ASD are quite gifted in certain subjects this is not always the case. So why is this such a popular misconception? It could be because many people with ASD have areas of special interest which they might fixate on. This means they may know a lot about a specific subject. Though this is common, it isn’t an indicator of intelligence, just interest.

Myth 3: People with ASD are emotionless and lack empathy

This couldn’t be further from the truth. According to an article in Pediatric Health, Medicine, and Therapeutics, most children with autism can recognize emotions similar to their same-age peers by matching them. Often, people with ASD, especially children, may not be able to recognize the emotions their feeling, or they might not have the words to express what they’re feeling. But this doesn’t mean they have no emotions. Some people with ASD may also have ‘flat affect’, or difficulty conveying tone with their voice, which can make their speech seem emotionless or even rude. Besides, they may have difficulting picking up on other people’s tone or other non-verbal cues in communication and fail to respond appropriately as a result. People without ASD may misunderstand this as a lack of emotion or empathy.

Myth 4: People with ASD need to be taken care of throughout their lives

While this may be true of some severe cases, it is important to remember that ASD is a spectrum. Many people with ASD aren’t obvious about their diagnosis, and on average have been given the tools they need to navigate the world at a young age. Most people with ASD grow to be able to manage their symptoms on their own and go on to live fully independent and healthy lives.

Myth 5: Stem Cell Therapy for Autism is a cure for ASD

There is no cure for ASD, and many own voices activists (activists who have ASD themselves), believe it’s not something that needs to be cured, but better understood and accommodated. That being said, there are a variety of treatments that can help manage symptoms and make it easier for people with ASD to interact with their peers. Stem Cell Therapy for Autism is just one of these. When they are extracted from a person’s bone marrow and processed, Stem Cells can detoxify the surrounding area and can replace damaged cells to reduce inflammation, which is thought to be an underlying cause of many of the symptoms of ASD.

Popular media and genuine misunderstanding have painted a cloudy picture of ASD over the years. For example, there are still thousands of people who believe that autism is caused by vaccines despite this being repeatedly proven false. A misconception that owes its thanks to one falsified research paper and a very vocal media push. But as we learn more about the condition through the eyes of the people living with it, that picture clears a bit. We learn to put aside the image of the ‘Autistic Savant’, the idea of ‘Emotionless Monotone’, and misunderstandings around Stem Cell Therapy for Autism. Instead, we see the people behind the condition and learn to look at the world a little differently.