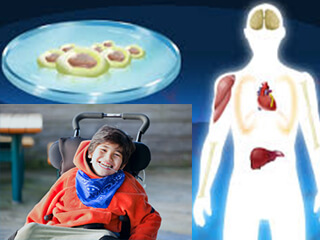 Cerebral palsy is a broad term used to describe a set of permanent movement disorders that appear early on in life and primarily affect that part of the brain that controls movement, balance and posture. The word ‘cerebral’ refers to that part of the brain dealing with motor function while ‘palsy’ refers to a complete or partial paralysis of voluntary muscle movement frequently accompanied by uncontrolled tremors.

Although much remains unclear about the exact causes of this disorder, evidence suggests that most of the problems occur during pregnancy, the birthing process or shortly after birth. Infections during pregnancy such as toxoplasmosis, bacterial meningitis, rubella or viral encephalitis have been implicated in cerebral palsy. Other factors include poor oxygen supply to the baby’s brain, before, during and immediately after birth as well as preterm births or being part of multiple births. Exposure to methylmercury during pregnancy and head injuries sustained during the early years of life could also contribute to cerebral palsy.

This condition is usually missed by doctors and parents alike during the early years of life and becomes prominent as a non-progressive brain damage during the second or third year.

Cerebral palsy has been documented throughout history with the first mention being made by Hippocrates in the 5th century BCE. Although it cannot be cured, a lot can be done to prevent problems and help your child make the best of his abilities. The field of physical therapy, Occupational therapy, speech therapy, and medications have been used to help muscle stiffness as well as surgery to take care of overactive nerves and lax muscles .

Over the last few years, researchers have been involved in stem cell therapy to see their potential effect on neurodegenerative disorders. The therapy involves harvesting stem cells from patients’ bone marrow and injecting it near the brain and spinal cord to help repair the injured area of the brain. At Plexus Neuro and Stem Cell Research Center, Bangalore, this therapy has produced far superior results as compared to the traditional therapy. Several hundreds of patients have benefited from this and have become almost normal. So parents should take heart as hope is there for a more comprehensive treatment for those with cerebral palsy now!