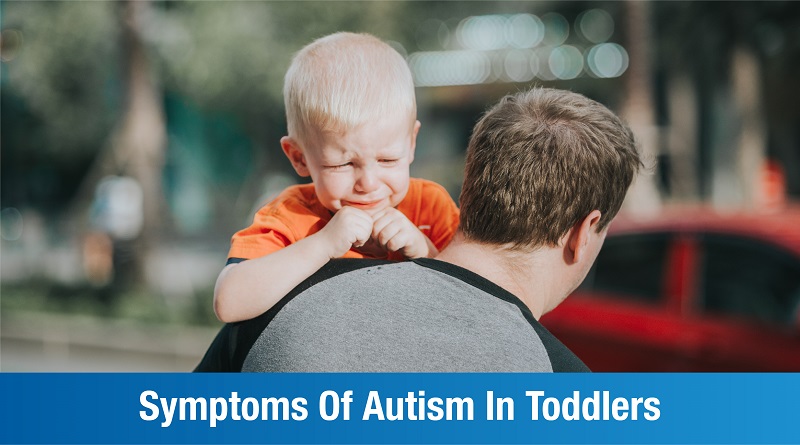 As a parent watching their young child explore the world, it is concerning to see them not hitting their developmental milestones at the right age. Neurodevelopmental disorders like Autism are more common than you think. Autism symptoms fall on a spectrum, which means that each child’s symptoms are different, which in turn means that Autism can go undetected for several months. While most children receive an Autism diagnosis at around three years of age, it can sometimes be caught as early as 18 months. Here, we offer a guide to the signs and symptoms of Autism in toddlers and young children so you know what to watch out for.

Autism or Autism Spectrum Disorder (ASD) refers to a range of neurodevelopmental disorders that affect social, behavioral, and communicative abilities. Children with Autism often have trouble following rules or communicating with others, which makes it hard for them to form relationships. The symptoms of Autism will usually become evident by the time the child is two or three years old. Occupational Therapy, Behavioral Therapy, Speech Therapy, and Social Skills Therapy are all useful forms of intervention to help the child adjust better to social situations.

For some children, Autism symptoms appear as early as in the first few months of life. Since there are no obvious physical symptoms, it can be hard to detect these. However, parents can observe how the baby interacts with the world around them and take note of any unusual behaviors. Some of the early signs of Autism in babies include:

It is important, however, to remember that some children simply meet developmental milestones later than others. As such, observing a few Autism symptoms in babies does not have to be cause for panic.

Symptoms of Autism in toddlers

As your child grows up, the developmental differences become more apparent. However, this is not always the case. Particularly if your child has only mild Autism symptoms, they may simply be attributed to naught behavior or a reserved nature. In addition, Autism is a spectrum disorder, which means that the range of symptoms each child displays is highly different. The common signs and symptoms of Autism in toddlers can be categorized into three types. These include:

Autism symptoms in girls Vs in boys

It is commonly observed that Autism is diagnosed much more frequently in boys, than in girls. This is because certain unusual behaviors, for instance, might be more noticeable in boys on account of the toys they typically play with. An obsession with the wheels of cars or with lining up Lego blocks the same way, again and again, is fairly noticeable. On the other hand, a tendency in girls to arrange their dolls in a straight line or dress them all the same way might just be viewed as a liking for neatness or those particular clothes.

It has also been observed that girls with Autism, particularly the high-functioning kind, are able to mimic neurotypical social traits much better than boys. Girls may also be culturally expected to be quieter and shyer than boys, which is why traits such as not making eye contact or being withdrawn around people could be viewed positively as modesty, rather than as Autism symptoms in toddlers.

What to do if you suspect your child has Autism

If you have been monitoring your child’s developmental progress and suspect that they might have Autism, the first thing is to not fret needlessly. Sometimes, children may simply reach developmental milestones later than other children. It is important, nonetheless, to take your child to the pediatrician for a proper screening. Ideally, you should have them screened at nine months of age, and at the very least at 12 months of age.

There is no single test that can diagnose Autism. Instead, the doctor will closely monitor your child and ask you detailed questions about the symptoms you have observed so far. Putting your child in a social setting, such as with a therapist or in a play group with other children, is a useful way of noting Autism symptoms in toddlers. If the pediatrician suspects Autism, they may recommend you to a specialist for further testing. It may take a while to actually confirm a diagnosis, as many of the signs and symptoms of Autism in toddlers are not conclusive until much later.

If your child indeed has Autism, there are several excellent treatment options available to manage the symptoms and help them function effectively. The therapist will tailor a plan to your child to help them learn positive behaviors, communicate their wants and needs, interact effectively with other people, and handle changes and adjustments better. The earlier the intervention, the more your child can benefit from the treatment.

Level 1 Autism is regarded as ‘high-functioning’ Autism, or the least severe level on the Autism spectrum. Children with Level 1 Autism do not usually have language delays, but they may have trouble saying the right thing at the right time, or understanding non-verbal cues like gestures or body language.

It is critical for parents or caregivers of a child with Autism to not take their behaviors personally. If the child walks away from you while you are speaking to them, or has a meltdown in public, remember that they process things differently from how neurotypical children might. Exercise patience.

Autism belongs to a category of neurodevelopmental conditions known as pervasive developmental disorders (PDDs). The core deficits that PDDs are characterized by include impaired reciprocal social interaction, impaired communication, and restricted and repetitive patterns of behavior.

The diagnosis of Autism usually involves observations on the child’s behavior and developmental history, as well as certain screening tests. Since there is no single medical test for Autism, it often involves ruling out other conditions that may be behind the Autism symptoms in toddlers.

Sometimes, it may happen that a child displays behavior consistent with Autism symptoms in toddlers, but then these symptoms go away. This simply means that the child is reaching some developmental milestones later than usual. Parents need not worry, as every child is different and grows at their own pace.

If children do not receive intervention for Autism at the right age, they will continue to struggle with social interactions and may never develop the skills needed to communicate effectively. This could have adverse implications for their life as they grow up, including an inability to complete degrees or hold down jobs, and difficulty having relationships.

Children with Autism tend to have trouble forming and maintaining relationships with other people, both in professional settings and personally. They may experience social isolation as their symptoms make it hard for them to fit in. The stress of looking after a child with Autism, moreover, can cause strife within the family.

As a parent, the best way you can help your child navigate Autism symptoms in toddlers is by creating a safe, loving space for them at home. Be patient as you explain things to them and praise them for any and all efforts they make. In addition, pay special attention to any sensory processing issues and ensure you have ways for the child to be soothed if they have a sensory meltdown.

The typical symptoms of Autism in children include not wanting to be around other people, finding it difficult to express oneself, appearing rude without meaning to, not understanding non-verbal cues like gestures or expressions, and being uncomfortable in social situations.

Children with Autism can fall ill just like their neurotypical peers. In addition, there is some evidence to show that children with Autism are at a higher risk for certain health complications like asthma, allergies, diabetes, gastrointestinal problems, and heart disease.

The typical Autism symptoms in toddlers for those with the high-functioning variety include a reluctance to play with peers, a reluctance to share toys, and difficulty following instructions or doing things in a group. They will typically not have language delays, and may even have above-average verbal ability.

One of the classic Autism symptoms in toddlers is a delay in speech and language skills. They may say their first word only at 36 months, whereas the average is between 12 and 18 months. However, children with high-functioning Autism may start talking at the same age as their neurotypical peers, or even earlier.

Studies indicate that between 40% and 80% of children with Autism exhibit sleep problems. This chiefly takes the form of difficulty falling and staying asleep or an irregular sleep schedule.

Speech delay is one of the common Autism symptoms in babies. However, it could also occur due to an oral impairment such as a cleft lip or a short frenulum, or some other condition like Cerebral Palsy.

In conclusion, spotting a few of the early signs of Autism in babies is not necessarily a cause for worry. However, for your own peace of mind, it is important to take your child for developmental check-ups as early as possible. This not only helps to rule out other health conditions the child may have but also ensures early intervention and treatment for Autism. You can be assured, therefore, of a healthy future for your toddler.